Judge Stephen Reinhardt, a liberal stalwart of the US 9th Circuit Court of Appeals, died Thursday at the age of 87.

The liberal judge passed of a heart attack during a visit to his dermatologist in Los Angeles, according to court spokesman David Madden.

His untimely death after his nearly four-decade career comes as a surprise to family and friends.

Reinhardt made a name for himself as a staunch liberal who struck down California’s gay marriage ban in 2012, viewed the Second Amendment’s right to bear arms as a collective rather than individual right, and fought for prisoner’s rights.

Circuit Judge Stephen R. Reinhardt died Thursday at the age of 87,  pictured in December 2010 at Ninth Circuit Court of Appeals in San Francisco 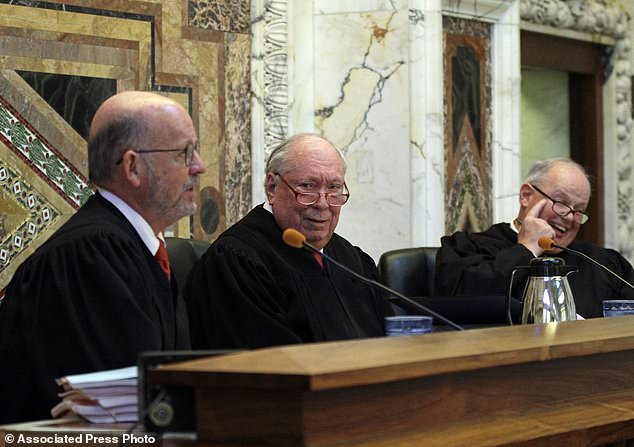 9th Circuit Chief Judge Sidney Thomas said Reinhardt, pictured center, will be remembered as ‘one of the giants of the federal bench’

‘As a judge, he was deeply principled, fiercely passionate about the law and fearless in his decisions,’ 9th Circuit Chief Judge Sidney Thomas said in a statement.

‘He will be remembered as one of the giants of the federal bench,’ he added.

Reinhardt was appointed to the bench by President Jimmy Carter in 1979.

He is sixth longest-serving judge on the court which presides over a myriad of western states including Alaska, Arizona, California, Hawaii, Nevada, Oregon, Washington, Montana, Idaho, Guam and the Northern Mariana Islands.

The New York-native, studied at Southern California’s Pomona College and went on to earn his law degree at Yale Law School.

He then served in the US Air Force for two years and went on to serve as a clerk for a federal judge in the District of Columbia.

Later he entered private practice in Los Angeles where he served as an informal adviser to Los Angeles Mayor Tom Bradley and then on the city’s Police Commission from 1975 until his appointment to the 9th Circuit.

He was considered to be one of the most liberal judges on the 9th Circuit and his rulings often placed him on the side of immigrants and prisoners.

Some of his milestone achievements include a 1996 opinion piece that struck down a Washington state law that prohibited doctors from prescribing medication to help terminally ill patients die. 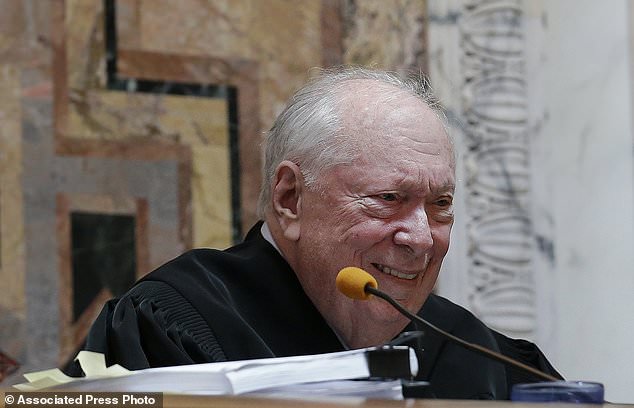 The liberal stalwart, pictured above, died of a heart attack during a trip to the dermatologist office in Los Angeles 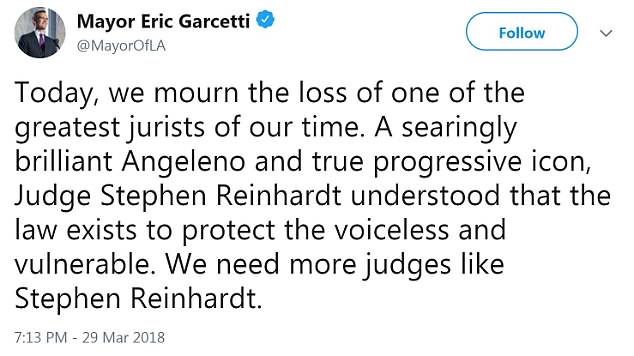 Another piece penned last year critiqued the Trump administration’s move to deport a man who entered the country illegally three decades ago but who went on to become a respected businessmen in Hawaii.

He called the administration ‘inhumane’ and the deportation ‘contrary to the values of the country and its legal system’.

‘He was a giant — not just on the 9th Circuit, but within the law,’ University of California, Berkeley, law school Dean Erwin Chemerinsky told the Los Angeles Times.

‘He also was a judge with a particular vision of the law, based on enforcing the Constitution to protect people,’ he added.

Other achievements include ruling that the words ‘under God’ in the Pledge of Allegiance were unconstitutional, which was later overturned.

He also ruled that overcrowding in California’s prison system was unconstitutional.

Reinhardt leaves behind his wife, Ramona Ripston, the former director of the American Civil Liberties Union of Southern California and his three adult children Mark, Justin, and Dana.

His family ask that in lieu of flowers, donations on be made to the ACLU, according to Buzzfeed News.

‘Today, we mourn the loss of one of the greatest jurists of our time. A searingly brilliant Angeleno and true progressive icon, Judge Stephen Reinhardt understood that the law exists to protect the voiceless and vulnerable. We need more judges like Stephen Reinhardt,’ he wrote.