Tony Blair has blasted claims he is plotting with French president Emmanuel Macron to force the UK to hold a second referendum.

The ex-Labour prime minister, a die-hard Remainer who backs a new vote that could see Britain stay in the EU, denied telling leaders to ‘hold firm’ and pressure Theresa May in to holding a new poll.

Mr Blair told Good Morning Britain blamed ‘a Conservative source’, saying ‘the reason (the EU’s) got a problem is not because I’ve given them a problem’. 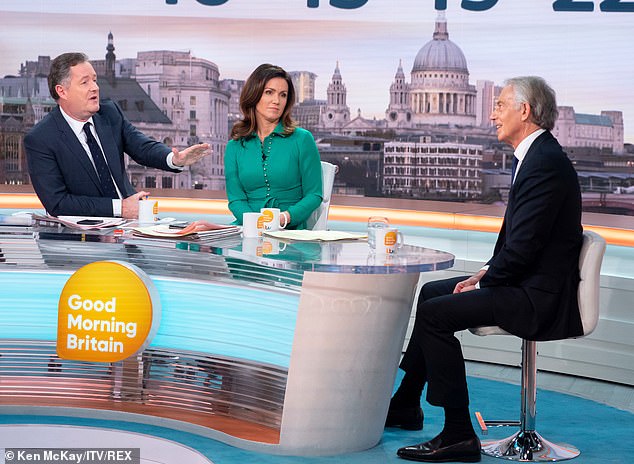 Mr Blair told Piers Morgan and Susanna Reid that he had urged EU leaders to address concerns that drove the Brexit vote of there was a second refrendum, saying they were ‘Europe-wide concerns and not just British concerns’

‘It’s nothing to do with the negotiation, because … in the end the Europeans know perfectly well what their position is.

‘What I have been saying to them is that if Britain thinks again, if you get to the point where we do go back to the people, then Europe should also think again.

‘Because the issues that drove Brexit – immigration, questions around the Brussels bureaucracy, the way Europe operated – are actually Europe-wide concerns and not just British concerns.’

He added: ‘The idea that I’ve been going over to Europe and saying hold firm, don’t give in…. I think you’ll find that’s from a Conservative source.’

Mr Blair also maintained there had to be another referendum, saying: ‘The reason I say you can’t change Brexit without a further Referendum, is because it was a Referendum that mandated it.

But this sparked a row with host Piers Morgan, who said: ‘Surely we owe it to the people … to enact Brexit and see it works?

‘If we don’t do that and we do slip into some second referendum and it goes the other way, there will be hell to pay in this country.

‘Many people would be enraged, this problem wouldn’t go away, it wouldn’t be resolved by a second referendum, they would just demand another one.’

Mr Blair also suggested that Theresa May could pull a Brexit rabbit out of a hat, as long as warring MPs could make up their mind what form it should take.

He added: ‘She can still now rescue this situation if she puts before parliament the core options.

‘The real reason Parliament is rejecting this deal – at the heart of it – is the fact that her deal leaves Northern Ireland in a bit of a mess as you’re not quite sure what the situation is there and the future relationship a mystery and that is not a sensible situation to be in.’