Transport secretary Chris Grayling blocked tougher anti-drone laws because his department was too busy making preparations for a no-deal Brexit.

Officials had been planning tough new laws to protect airports from drone attacks by allowing the deployment of technology to intercept and take control of rogue UAVs.

The new legislation was due to be published in the spring but had been delayed because civil servants were being stretched by preparing for Brexit. 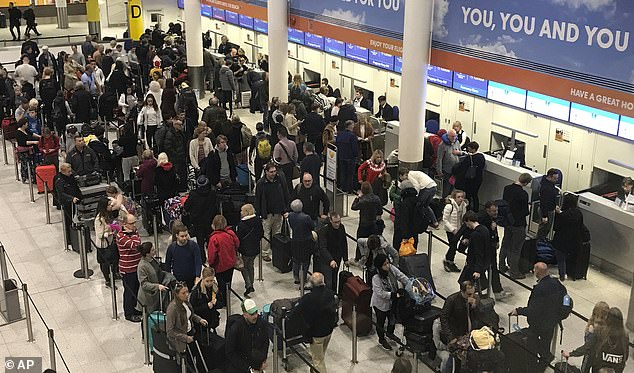 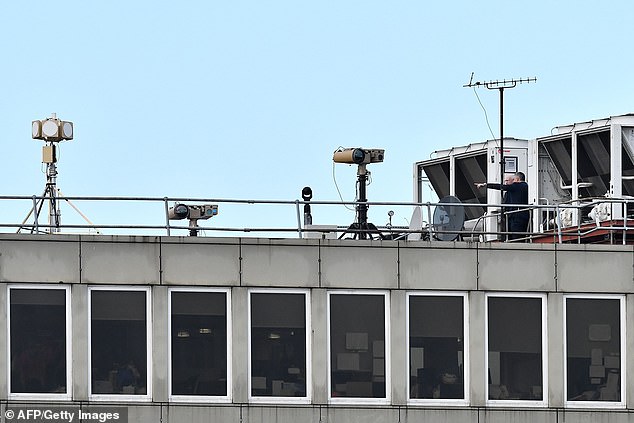 Airline pilots and air traffic controllers have been warning authorities about the threat posed by drones by several years.

It is illegal to fly drones within 1,000 metres of a British airport boundary, punishable by five years in prison.

With a surge in public enthusiasm for drones, there has been an increase in near-collisions by unmanned aircraft and commercial jets in recent years.

The number of near misses between private drones and aircraft in Britain more than tripled between 2015 and 2017, with 92 incidents recorded last year, according to the UK Airprox Board regulator.

Shadow transport secretary Andy McDonald told The Times: ‘The government has glaringly failed to heed the warning and bring forward the legislation that was promised more than a year ago.

‘Once again, there is a lack of leadership from the transport secretary.’ 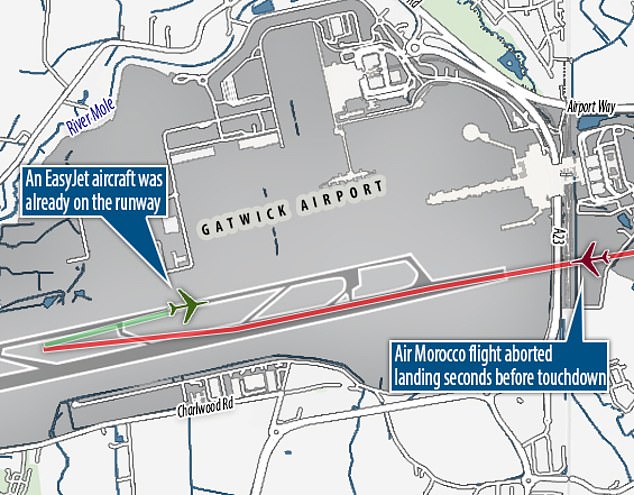 An Air Morocco flight was seconds from landing when it had to ‘go around’ after being warned of a drone near the aerodome. The Moroccan flight, right, was following an easyJet aircraft which had landed less than a minute earlier and was on the taxi way, left

Brian Strutton of the British Airline Pilots Association said: ‘Brexit has drained so much time that the Department for Transport and Civil Aviation Authority really haven’t had any opportunity to look at anything else.’

Flights were briefly grounded at the airport on Friday evening after a fresh sighting at around 5.10pm, but military measures reassured operators it was safe to reopen the runway shortly afterwards.

Despite flights resuming after 70 minutes, airlines were still cancelling and delaying outbound flights throughout the evening and into the night.

Inbound flights were also operating with delays, with some scheduled to arrive at Gatwick in the early hours of Saturday.

Police believe more than one unmanned aircraft are responsible for the drone activity and are investigating the possibility of multiple culprits.

One piece of equipment believed to have been deployed at the airport is the Israeli-developed Drone Dome system, which can detect drones using radar.

It can also jam communications between the drone and its operator, enabling authorities to take control of and land the drone.

Sussex Police Assistant Chief Constable Steve Barry said less sophisticated options are also available, including shotguns, although blasting drones out of the sky was one of the least effective tactics.

Police are keeping an open mind over the motive, with theories including an environmental protest, but they are not treating it as a terrorist incident.

Mr Barry said there is no evidence of involvement of a foreign power, but described the drone activity as “really high-end criminal behaviour”.

“This is a really significant criminal offence,” he said.

“There are resources here at Gatwick Airport now to mitigate the threat of that and a lot of resources to bring the offender to justice.”

The Government denied accusations that it had been slow to combat the threat from drones, and had delayed plans to introduce laws to regulate their use.

Shadow transport spokesman Andy McDonald has said the Government had been too slow to act, despite growing concern over increasing numbers of near misses between drones and manned airports.

The Times reported that Transport Secretary Chris Grayling had shelved plans to introduce legislation amid pressure on his department, with civil servants being diverted to prepare for Brexit.

But a Department for Transport spokesman said: ‘These claims are a combination of nonsense and gross misrepresentation.

‘The drones at Gatwick have been flown illegally. The Government changed the law this year to make it illegal to fly drones within 1,000 meters of an airport or above 400 feet.

‘The law couldn’t be any more clear: those found endangering aircraft face significant jail terms. Next year further laws will come into effect to ensure drone users must be registered and pass safety tests.

‘We are continuing to introduce further measures and recently consulted on extending police powers to deal with people who misuse drones, as well working on the development of counter-drone technology to ensure incidents like this can’t happen again and to ensure aviation is well protected from incidents like this in the future.’