Two Australians and a British man have been rescued by a P&O cruise ship after their yacht sank in the Pacific Ocean.

The three sailors made a distress call which was picked up by the French territory of New Caledonia on Thursday morning.

Officials asked the Pacific Dawn cruise ship to divert and rescue the men who were found bobbing in an orange life raft around 100 metres from their submerged yacht.

Officials asked the Pacific Dawn cruise ship to divert and rescue the men, who were found in a life raft (pictured) with their yacht submerged 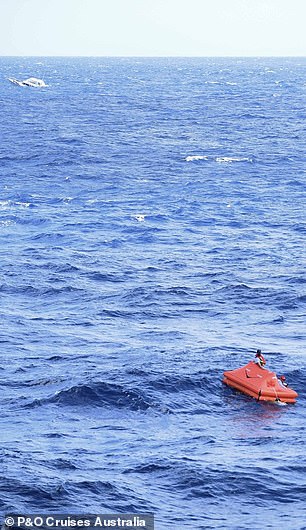 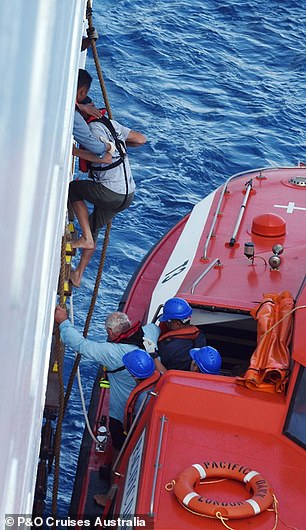 Left: The men float in a life raft 100m from their sunken yacht. Right: The men climb from Pacific Dawn’s ancillary vessel on to the main ship, aided by three staff members in blue hats

The unharmed men were picked up in an ancillary vessel and taken on board the main ship which will arrive in Brisbane on Saturday after a week-long Pacific cruise.

The men have not been identified and it is not clear why their yacht sank.

P&O said in a Facebook post: ‘We wanted to let you know that Pacific Dawn has this morning led the rescue of three seafarers adrift in a life raft near New Caledonia after abandoning their stricken yacht that was taking on water.

‘Our wonderful Pacific Dawn team have followed the highest maritime traditions going to the aid of fellow seafarers in peril.

‘Marine rescue authorities in Noumea asked Pacific Dawn to divert to assist the three seafarers after receiving their distress call.

‘All three are now safely aboard Pacific Dawn and being cared for by our devoted onboard team.’ 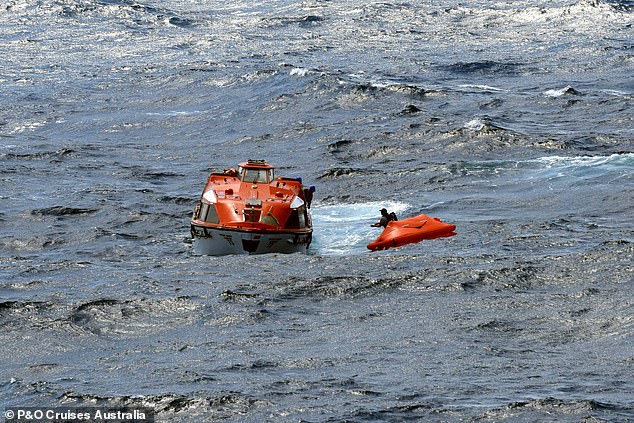 The three sailors made a distress call to officials in the French territory of New Caledonia on Thursday morning. Pictured: The men in a life raft (right) being picked up by rescuers