UK weather: Britain is battered by rain, sleet and hail

Motorists are facing tough driving conditions today as up to two inches of snow falls across parts of Britain.

Drivers are being urged to take care amid the wintry conditions in Scotland, with the M74, M77 and M8 among the routes affected by snow, and forecasters are warning of ice on untreated surfaces.

Meanwhile, the UK is braced for more wintry weather later this week, with temperatures expected to plunge as low as -10C (14F) at the weekend. Forecasters are predicting the next cold spell following the snow and sleet.

Frequent blustery showers of rain, sleet, snow and hail are hitting the country today, with Met Office ‘be aware’ warnings covering Scotland and Northern Ireland, which are valid from 3am until 6pm today.

It said up to two inches (5cm) of snow is expected to accumulate in places above 650ft (200m), while some snow is also possible at low levels. A further snow warning is in place for Scotland from 6pm today until 11am tomorrow.

A Nissan car is driven through heavy snow showers today on the B6277 near Middleton-in-Teesdale, County Durham 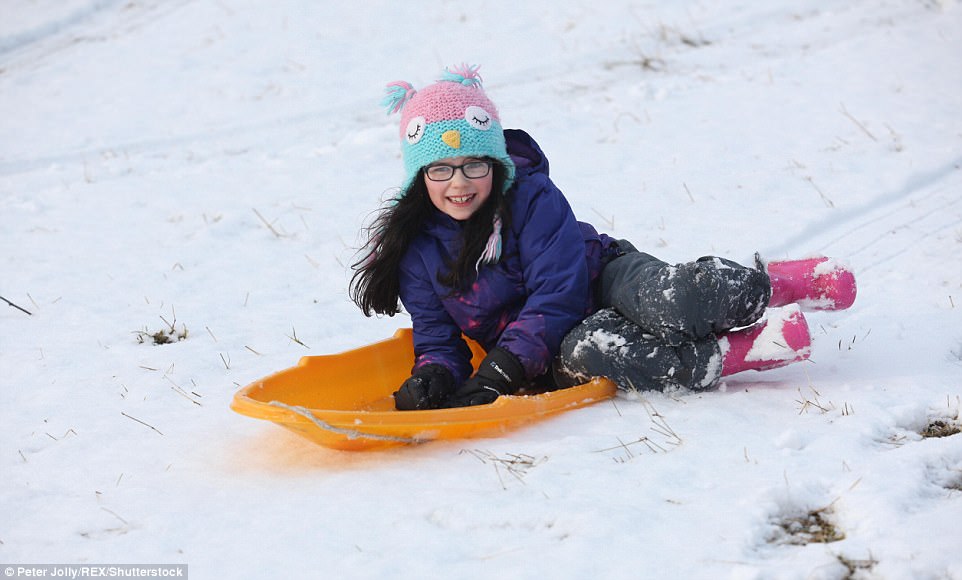 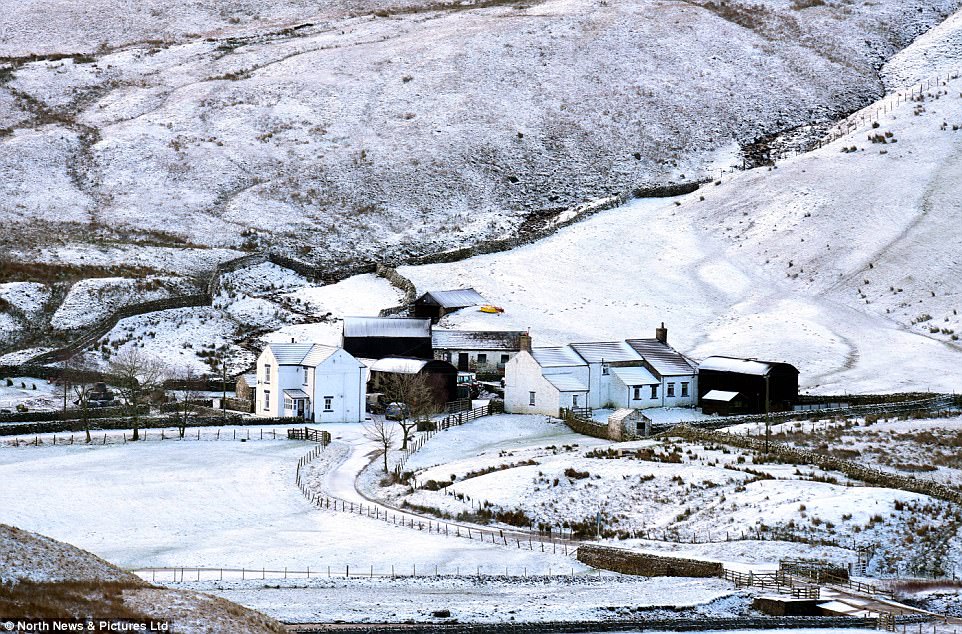 A farmstead in Teesdale, County Durham, is covered in snow this morning as winter weather returns to Northern England 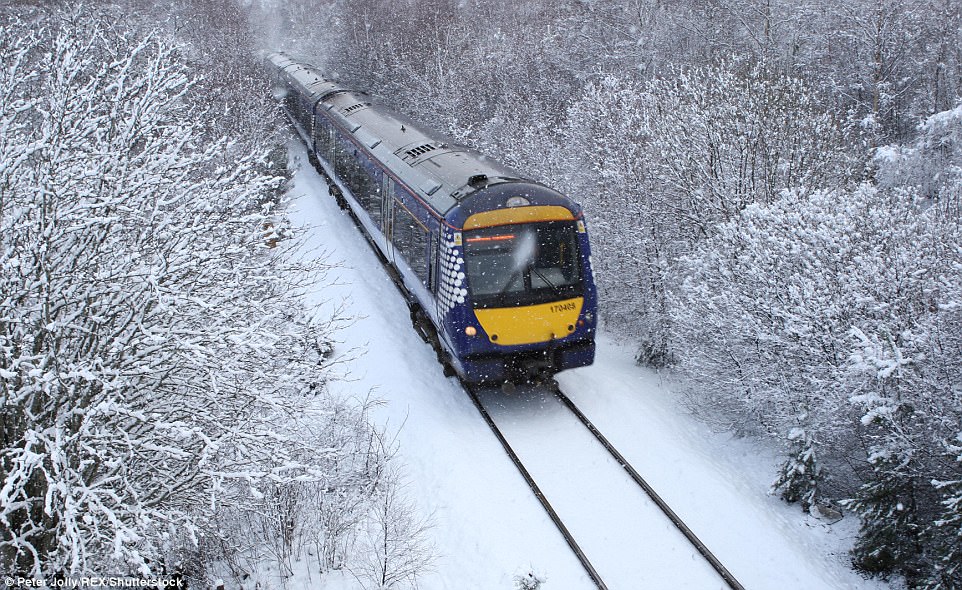 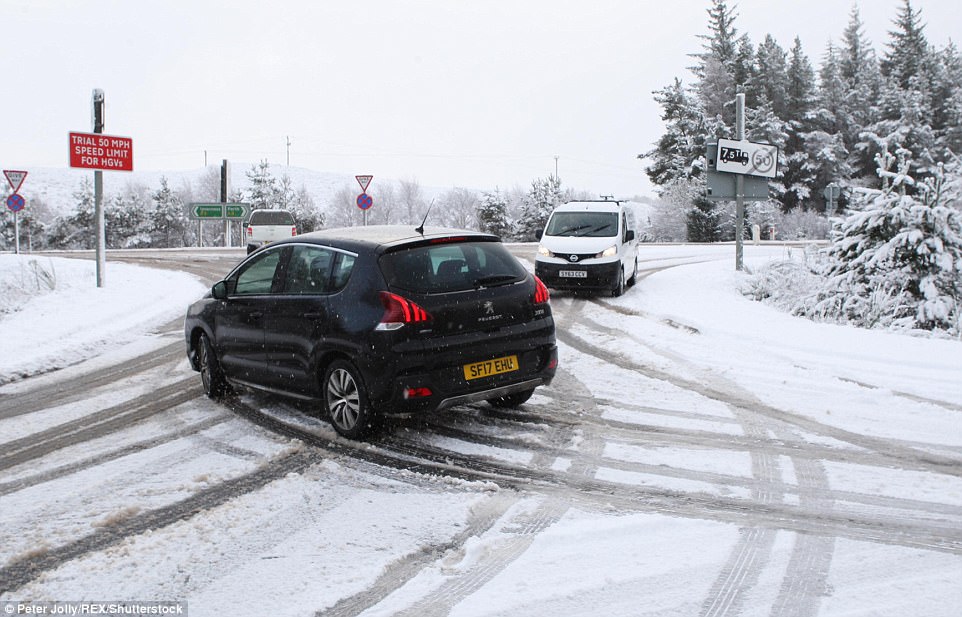 Meanwhile there is also an ice warning covering most of England including London for 6pm today to 10am tomorrow, warning of temperatures dropping quickly after rainfall, allowing ice to form on treated surfaces.

Forecasters warned of some roads and railways possibly being affected with longer journey times by road, bus and train services. The Met Office added: ‘Some injuries from slips and falls on icy surfaces are possible.’

Further south in England today, rain over the South East cleared during the morning, and there will be sunny spells for most areas, accompanied by a brisk north-westerly wind.

Later, if the clouds clear in time, sky gazers will enjoy a spectacular celestial show tonight with a remarkable phenomenon set to light up the sky with the arrival of a super Blue Moon.

The first Blue Moon – a second full moon in one month – since 2015 will also be a super moon, which means it will appear 14 per cent bigger and 30 per cent brighter. Astronomers say it will be at its highest time around 0.40am. 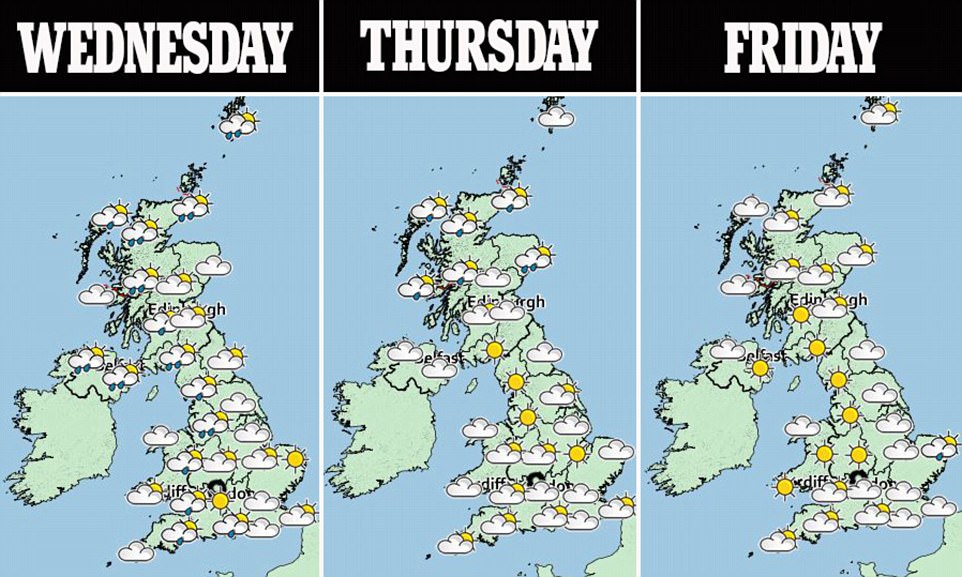 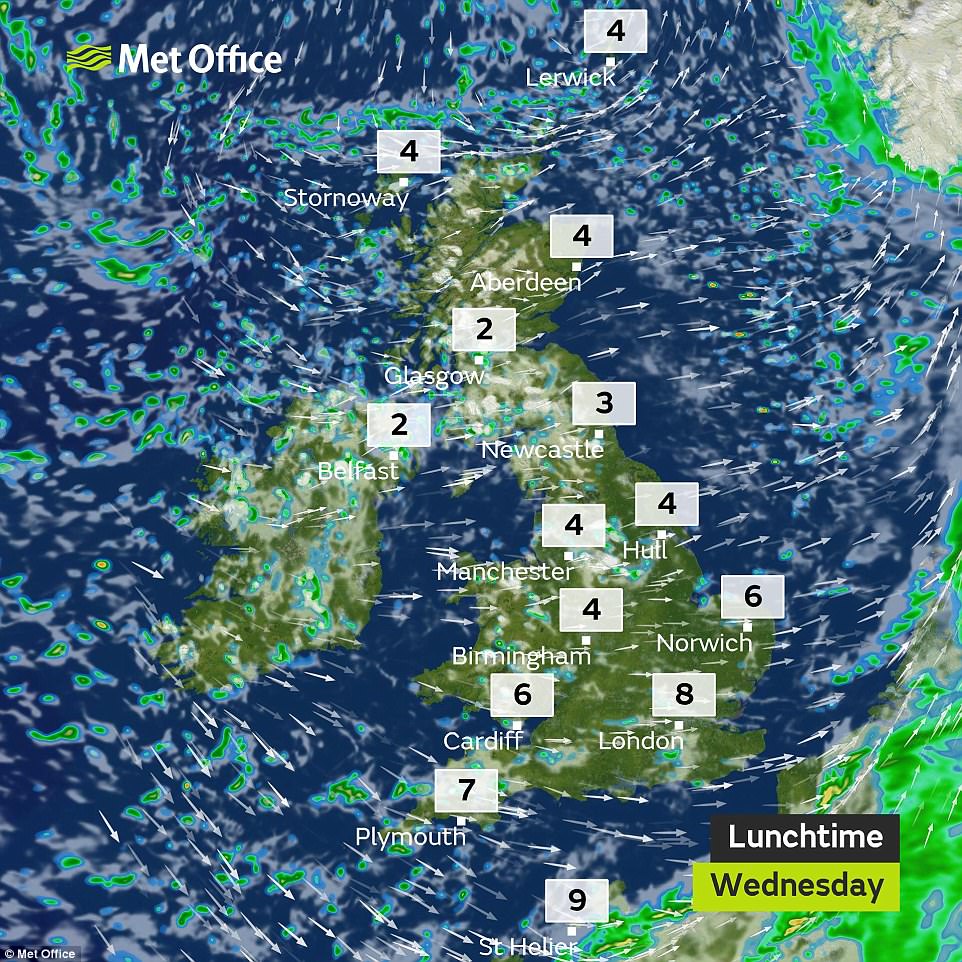 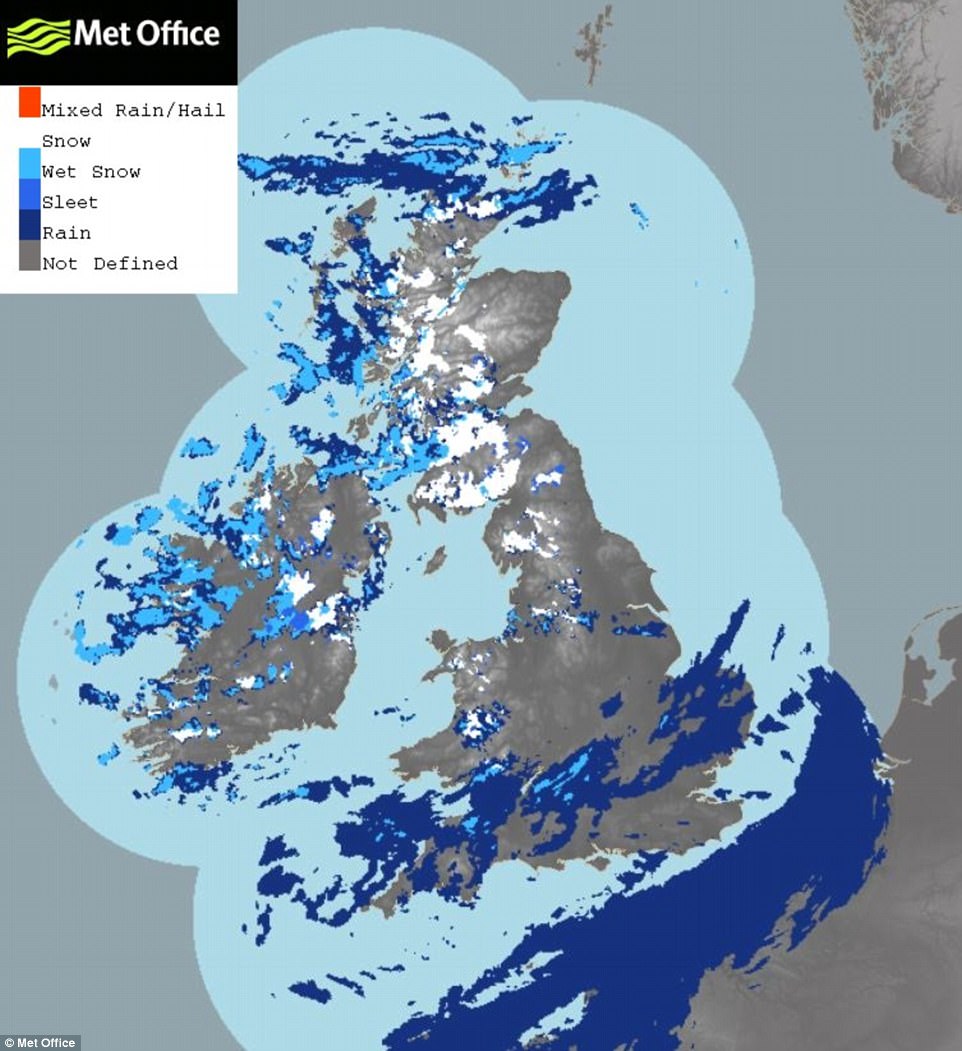 This graphic shows the parts of Scotland, Northern Ireland, Wales and Ireland that have been covered by snow today 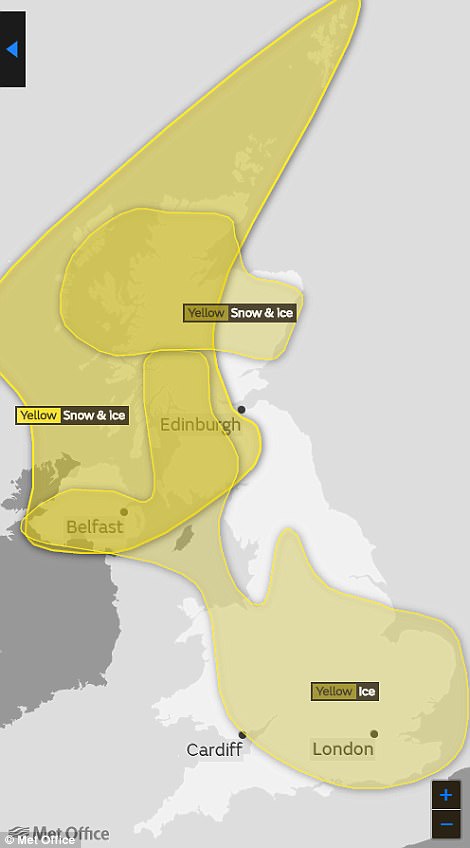 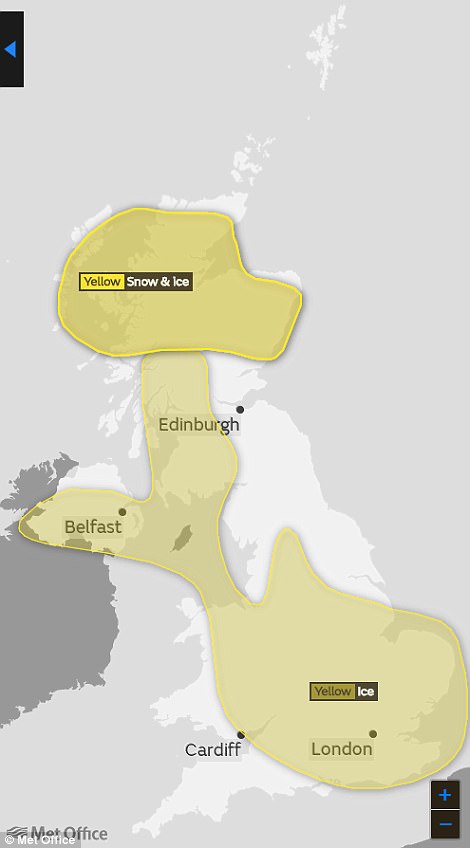 Met Office weather warnings for snow and ice in Britain today (left) and tomorrow (right), warning the public to ‘be aware’ 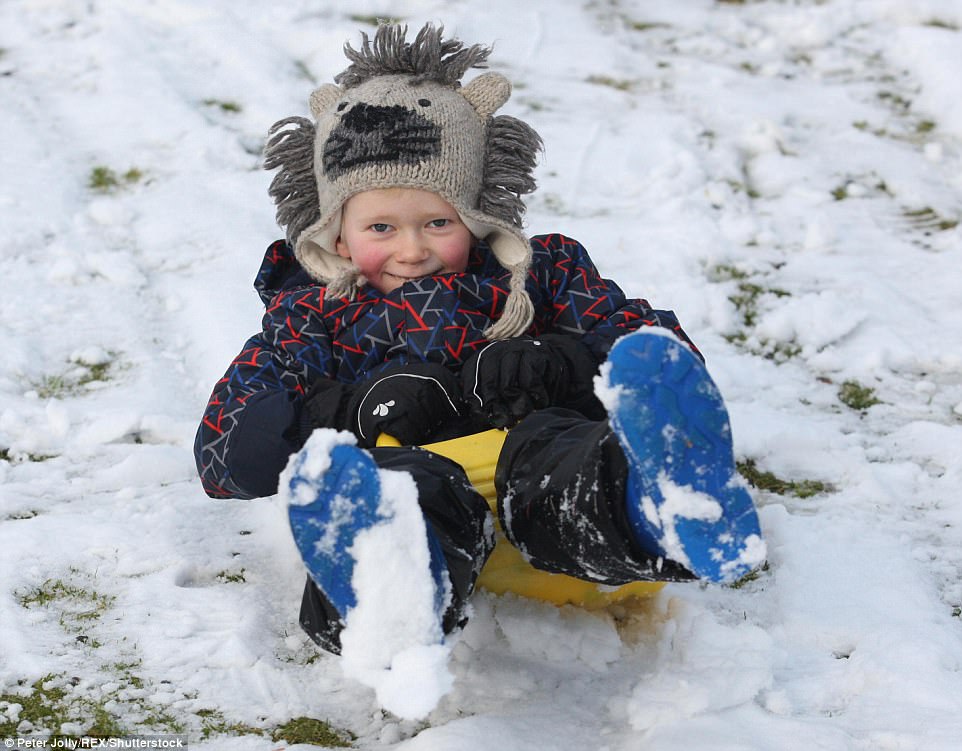 Ruairidh MacAskill, six, from Inveerness has fun playing in the snow at Kingussie in the Scottish Highlands today 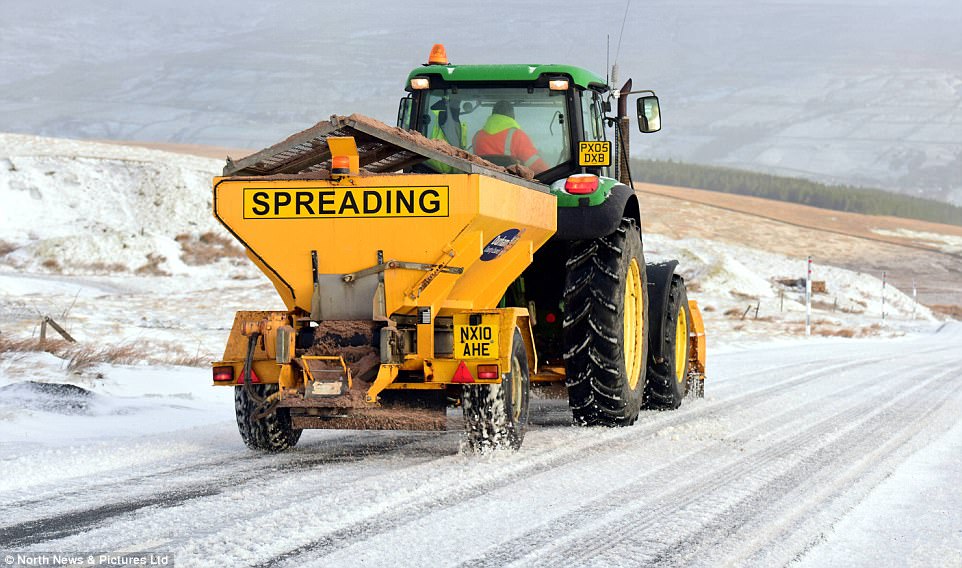 Tomorrow there will be some sunshine in many areas with showers mostly affecting North East England, Scotland, Northern Ireland and Wales. Some of the showers will be wintry, but mostly on high ground.

Friday will be mostly dry and sunny with the odd shower along the coast of eastern England in the morning, while on Saturday a band of rain will move across the UK affecting most areas by the evening – and it could be heavy.

Cold temperatures are expected to continue over the next few days, when they will widely drop below freezing overnight and could be as low as -5C (23F) in parts of Scotland with lying snow.

On Friday night the mercury could fall as low as -8C (17.6F) over parts of Scotland and could plunge to minus -10C (14F) on Sunday night. 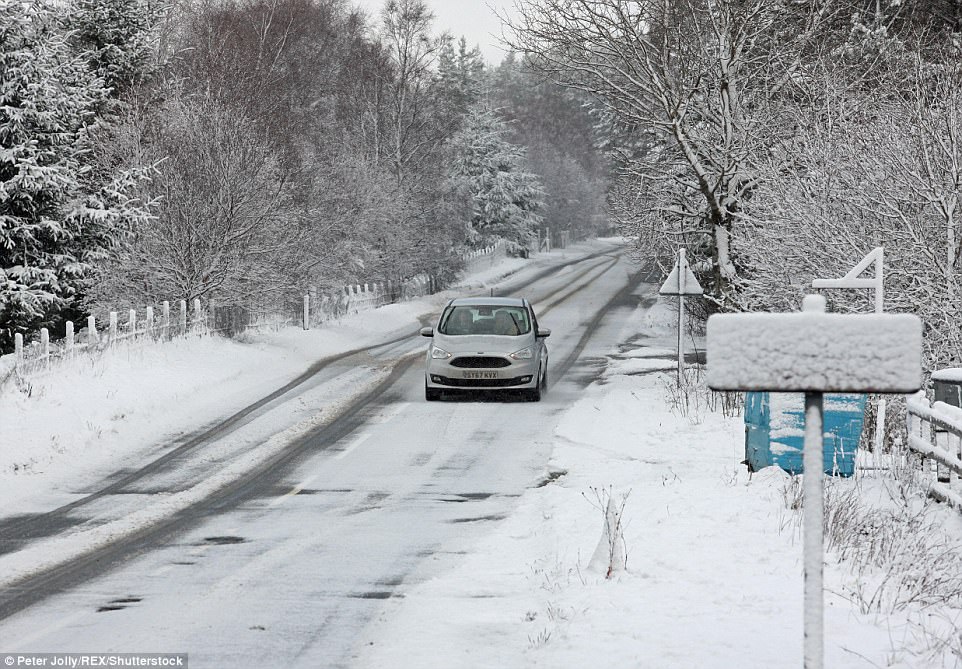 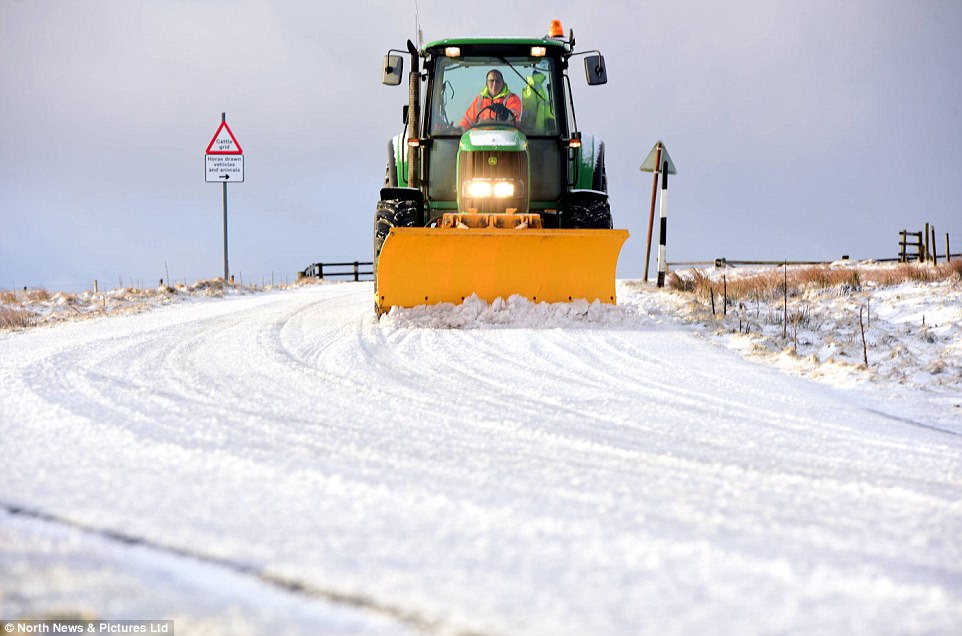 A snow plough clears the road in Weardale, County Durham, as parts of Britain are under a weather warning today 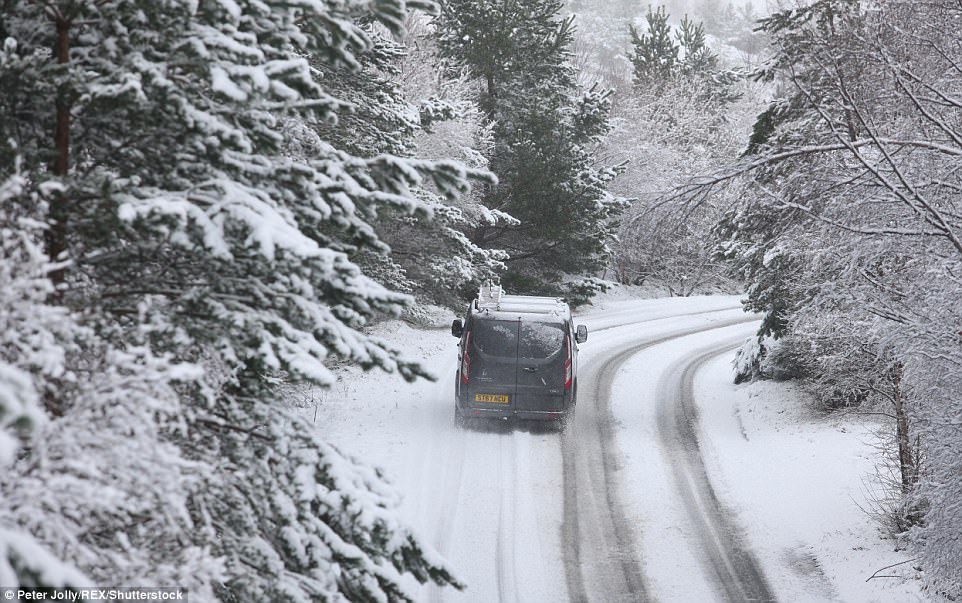 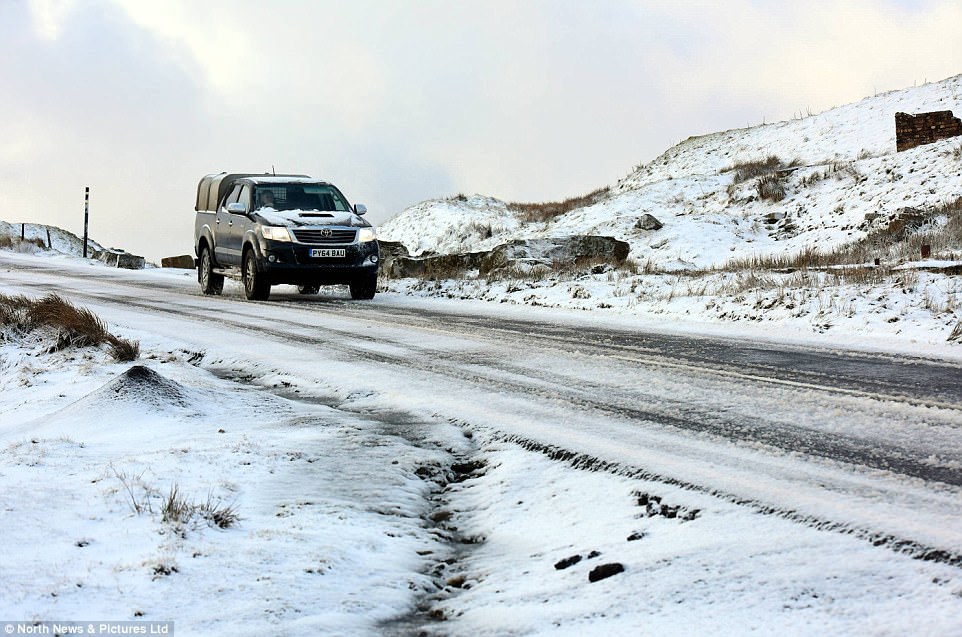 A motorist drives their Toyota Hilux through the snow in Weardale, County Durham, which has been hit by severe weather 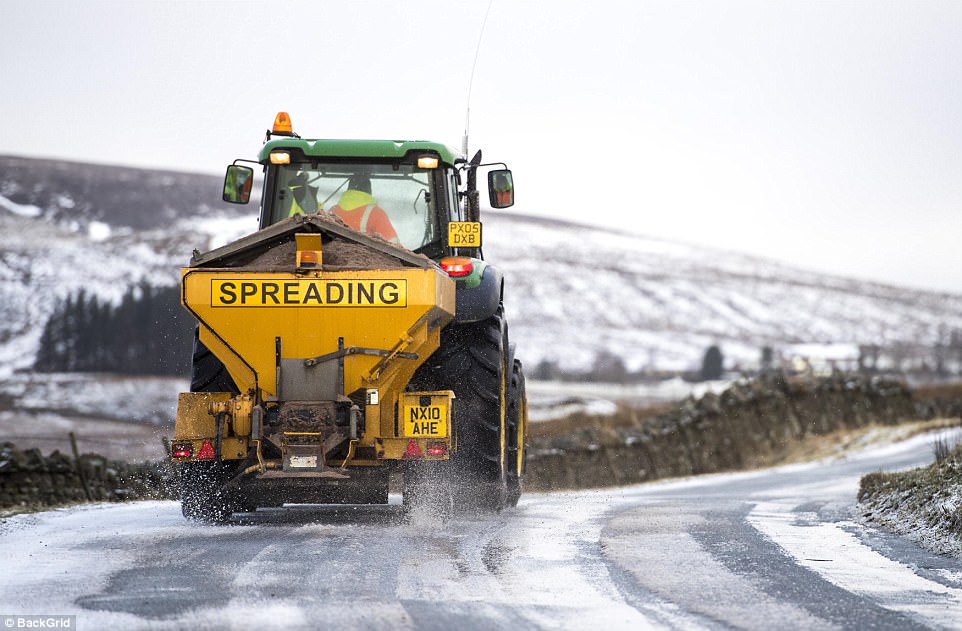 A snow plough spreads salt and ploughs the roads in Lanehead, County Durham, this morning as it tries to keep routes open

Met Office meteorologist Alex Burkill said: ‘On Sunday night into Monday temperatures could get as low as -10C or a little bit below in parts of Scotland, with lying snow and to -3C (27F) or -4C (25F) across many parts of the UK.

‘It will be a cold frosty start on Monday with a harsh frost.’ He said there could be more snow across the hills in Scotland and northern England on Saturday, and there is an ‘outside chance’ of some sleet in London.

However, forecasters said it is unlikely to be the coldest night of the year so far, which was overnight from January 20 to 21 when the mercury dropped to -13.7C (7F) at both Altnaharra and Kinbrace in the Highlands.

Ladbrokes meanwhile is offering 5-4 that snow falls anywhere in the UK this week, and 5-2 that next month becomes the coldest February on record. It also has 4-6 that temperatures fall below -10C (14F) this week.