Unions have demanded the government ‘steps back’ from its plan to reopen schools in England from June 1, saying there is not enough ‘protection’ for staff and pupils.

A joint statement issued through the Trades Union Congress complains of a ‘lack of understanding’ of the risks faced by teachers and children, with no provision for social distancing.

The intervention came as Education Secretary Gavin Williamson admitted the plan to get some primary school years back next month was ‘challenging’, but the government was following ‘the best scientific and medical advice’. He stressed that tests will be available for any staff and children who display symptoms.

Boris Johnson’s lockdown ‘road map’ set out that children could return to nurseries, and for Reception, Year 1 and Year 6 pupils to be back in school, from June 1 at the earliest.

The PM said he wants all primary school pupils in England to go back to school for a month before the summer. However, both Scotland and Wales have dismissed the timetable.

Schools like this one in Altrincham have stayed open for vulnerable children and key worker families, but ministers want more pupils to return from June 1

Education Secretary Gavin Williamson hinted at a move as he answered questions in the Commons today.

Robert Halfon, Conservative chairman of the Education Select Committee, highlighted how vulnerable children were not receiving the education they need during the lockdown.

He asked whether the government will ‘support the opening of summer schools over the holidays to be staffed by volunteers, graduates, an army of retired teachers, to provide catch-up tuition to these children who have been left behind’.

Mr Williamson said: ‘He’s right to highlight the many thousands of volunteers that want to reach out, help our children in order to be able to have the knowledge to succeed in the future, and we’re very closely looking at such schemes – working with schools, working with the sector – as to how we can make that available to them.’

Unions have already urged staff not to ‘engage’ with the government plans. And nine, representing school leaders, teachers and support staff, today accused the Government of showing a ‘lack of understanding’ about the dangers of the spread of coronavirus in schools.

The joint statement, from organisations including the NAHT school leaders’ union and the National Education Union (NEU), said: ‘We call on the Government to step back from June 1 and work with us to create the conditions for a safe return to schools based on the principles and tests we have set out.’

‘We all want schools to reopen, but that should only happen when it is safe to do so.

‘The Government is showing a lack of understanding about the dangers of the spread of coronavirus within schools, and outwards from schools to parents, sibling and relatives, and to the wider community.’

The Department for Education (DfE) issued guidelines on Monday which said primary school class sizes should be limited to 15 pupils and outdoor space should be utilised.

The advice, on how to safely reopen schools, calls for lunch and break times to be staggered, as well as drop-off and pick-up times, to reduce the number of pupils moving around.

On the guidance, the joint statement from the unions added: ‘Uniquely, it appears, school staff will not be protected by social distancing rules.

’15 children in a class, combined with their very young age, means that classrooms of four and five-year-olds could become sources of Covid-19 transmission and spread.’

‘We do not think that the Government should be posing this level of risk to our society,’ it said.

In the Commons this afternoon, Mr Williamson said all teachers and pupils will have access to Covid-19 tests if they develop symptoms when they return to schools.

Mr Williamson said he had set out ‘protective measures to minimise the risk of infection, including restricting class sizes and limiting mixing between groups’.

‘Crucially all children and staff will have access to testing if they develop symptoms of coronavirus,’ he said.

‘This will enable a track-and-trace approach to be taken to any confirmed cases.’

Mr Williamson acknowledged allowing pupils to return to school will be ‘challenging’.

He added: ‘We continue to follow the best medical and scientific advice and believe that this phased return is the most sensible course of action to take.

‘I know that this will be challenging but I know that nursery, school and college staff will do everything in their power to start welcoming our children back to continue their education.’

He went on: ‘When you have medical and scientific advice that is saying it’s the right time to start bringing schools back in a phased and controlled manner, it seems only the right thing to do and the only responsible thing to do.’

The Education Secretary said the Government has worked ‘very closely with all the teaching unions and headteachers’ unions’.

‘This is what’s informed and developed the guidance we have shared with schools,’ Mr Williamson said.

He added: ‘The reason we’re bringing schools back is we know that children benefit from being educated by their brilliant teachers in front of them.

‘We recognise children from the most disadvantaged backgrounds are the ones who are going to suffer the most if we do not bring schools back when we’re able to do so.

‘I’m more than happy to share all the advice we have received from Sage.’ 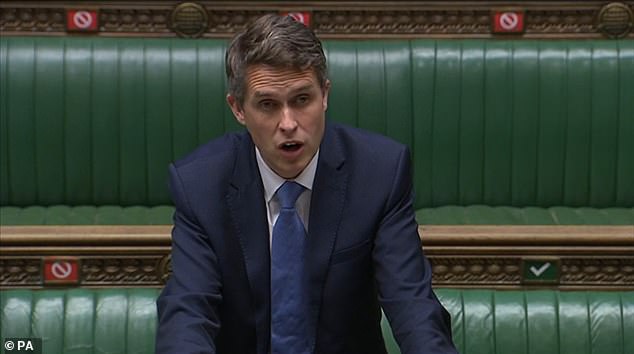 In the Commons, Education Secretary Gavin Williamson admitted the plan to get some primary school years back next month was ‘challenging’ 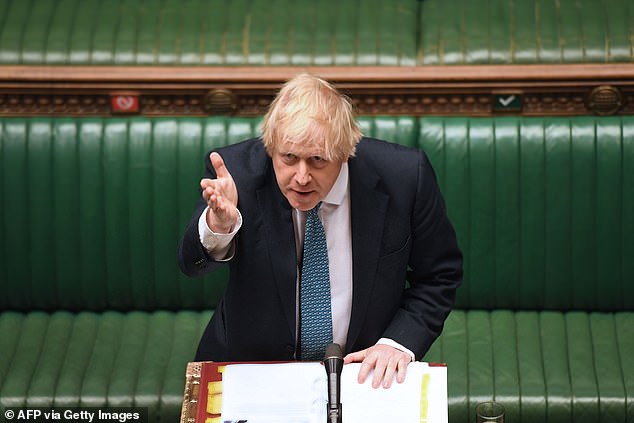 Boris Johnson ‘s lockdown ‘road map’ set out that children could return to nurseries, and for Reception, Year 1 and Year 6 pupils to be back in school, from June 1 at the earliest. He is pictured at PMQs today

Shadow education secretary Rebecca Long-Bailey said that the guidance provided by the Government on schools does not provide the ‘clear assurances’ needed on safety.

She told the Commons: ‘We all desperately want schools to reopen for the sake of children’s education and wellbeing.

‘But he must appreciate that the guidance provided so far does not yet provide the clear assurances over safety that are needed.

‘Shielding families, anxious, worried grandparents and teaching staff in fear, sadly sums up the theme of the last 48 hours.’

She told MPs: ‘Will he acknowledge that for younger year groups social distancing will be virtually impossible and that the current guidance sadly gives the impression that those pupils and staff should just accept being exposed?’

Mr Williamson responded: ‘I have always been clear that we would give the sector as much notice as possible and we have said that if we are allowed, which it seems likely that we will be able to, we’d like to see schools opening from June 1, giving schools as much forward notice as possible in order for them to get ready.’