Barcelona and Madrid will always be the big two for city breaks in Spain.

Then there’s the flamenco-dancing of Seville, the Moorish treasures of Granada and the ancient sights of Toledo — meaning Valencia, Spain’s third largest city, is often overlooked.

Yet there’s masses to see and do, with a lively nightlife in the labyrinthine lanes of the old town, magnificent churches, museums, bustling markets — and, yes, lovely, sandy beaches.

Valencia, Spain’s third largest city, is often overlooked yet there’s lots to see and do

This new, 21-room hotel is tucked away in a quieter spot in the heart of the tapas bar action of Barrio del Carmen. In this lovely 15th-century townhouse with beams, rooms are colourful with splashes of modern art. All doubles are split over two levels; family rooms have bunks. Doubles from £50, adhochoteles.com.

On a side street close to Jardin del Turia, a green ribbon of park where the River Turia once flowed, this hotel, part of the same chain as the Carmen above, is in a 19th-century building and has cosy rooms. Doubles from £70.

Also close to the many tapas bars of Barrio del Carmen — with a great rooftop bar and a small pool with city views — this is one for lovers of design hotels. Expect emerald and pink velvet armchairs alongside rubber tree plants in the minimalist reception. The 24 rooms are smart and reasonably sized. Doubles from £66, blanqhotels.com.

For the comforts of a business hotel that’s a 20-minute stroll from the beach and the futuristic attractions of La Ciudad de las Artes y las Ciencias, this is a good pick. Ask for a top-floor room with a balcony.

Breakfasts overflow with hams, cheeses, eggs and juices. The only downside is that it’s a bus ride or a 45-minute walk to the city centre. B&B doubles from £80, nh-hotels.com; prices fluctuate. 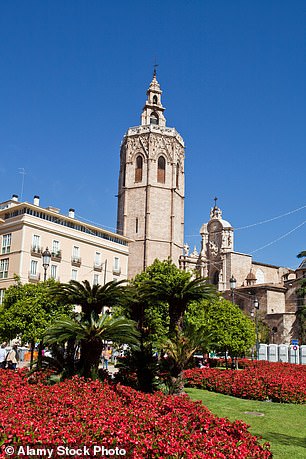 Entry to Valencia’s splendid baroque and gothic cathedral is £7 for tourists — a reasonable price to see the gold and agate chalice said to have been used by Christ at the Last Supper. Or pay £1.80 to climb the steps of El Miguelete for city views (catedraldevalencia.es).

Go for a long walk

A stroll along the marina at sunset is the perfect way to round off a day’s sightseeing. Sit and watch — or join — people leaping into the sea.

Bike lanes abound. A highlight is going for a spin along the Jardin del Turia, a riverbed that was turned into a park after the river flooded and had to be diverted (£4.50 a day).

Step into the future 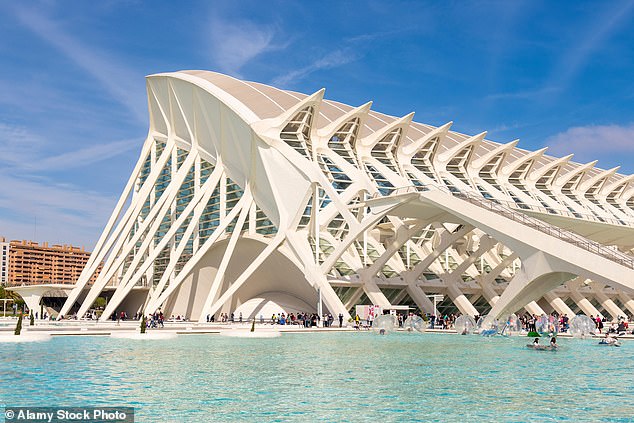 La Ciudad de las Artes y las Ciencias (City of Arts and Sciences) is a giant, space-age complex made up of a science museum, cinematic hall, aquarium and various exhibitions

There are dozens of places to choose from on the beachfront. El Escondite, next to the marina and favoured by sailors, is a terrific snack bar serving salads, sandwiches and vino blanco (£7 for food and wine, viulamarinadevalencia.com).

Close to Estacion del Norte, the Cafe Rialto Club is another place frequented by locals. It’s at the base of the beautiful, Art Deco Rialto Cinema which plays arthouse films. Set lunches with salads, pork stews, pudding and coffee cost from £10 (caferialto.es).

It’s a joy to wander around this gorgeous market, stopping for fresh juice (£1.35), a salty Iberico ham baguette (£2.25), or a slice of Spanish omelette (£2.25). Also check out Mercado Colon, on the east side of the city, which has a cluster of charming bars (mercadocentralvalencia.es; mercadocolon.es).

Barrio de Ruzafa is south of the old town and less touristy, with cool bars and a local neighbourhood feel. El Camerino is especially popular. Order a selection of dishes: spicy pork in cider sauce, fried potatoes with alioli, codfish croquettes and vegetable stews (£20 a head with wine, elcamerinoruzafa.com).

Horchata is an ice-cold milky local drink made from tiger nuts. Making it properly and serving it at just the right temperature is considered an art. There are numerous stalls, but the best offer organic versions (£2).

Easyjet returns from Gatwick cost from £60 (easyjet.com); a metro ride to the centre takes 25 minutes and costs £4.50.