Waters of the Galapagos Islands are being invaded by alien species

Marine species that have invaded the waters around the Galapagos Islands off the coast of Ecuador could threaten native sea life, experts have warned.

These ‘alien’ species included worms, mussels, crabs and sea squirts from as other areas of the Pacific as well as further afield – including the Mediterranean Sea.

Scientists say that the invading creatures cling onto ships from around the world before eventually settling and multiplying in their new environment.

The impact on the islands’ ecosystems is not yet known but researchers say that it is likely to threaten islands’ hundreds of marine species in the region.

Alien marine species have invaded the waters around the Galapagos Islands off the coast of Ecuador which could threaten the native sea life. Field surveys have found 48 new invasive species as well as five known non-native species. Here, the native marine iguana

Previous studies have shown that venomous lionfish, a known invader, prey on other fish species and can kill coral reefs.

Tiny moss animals, such as Amathia verticillata, can resemble stringy, gelatinous noodles, up to three feet (one metre) long when they form colonies, and can kill seagrass.

The area, which is a hotspot of biodiversity and a World Heritage Site, has a number of invasive species on land but little is known about those in the marine environment.

Seventeen of the invader species had been spotted around the waters before, but had been thought to have been native species.

The actual number of invasive species is likely to be much greater than that in the study as the surveys were undertaken only in some habitats around two of the larger islands.

‘From our knowledge of similar studies, I wouldn’t be surprised if the number was twice [as many],’ team member Professor Jim Carlton of Williams College in Massachusetts told the New Scientist. 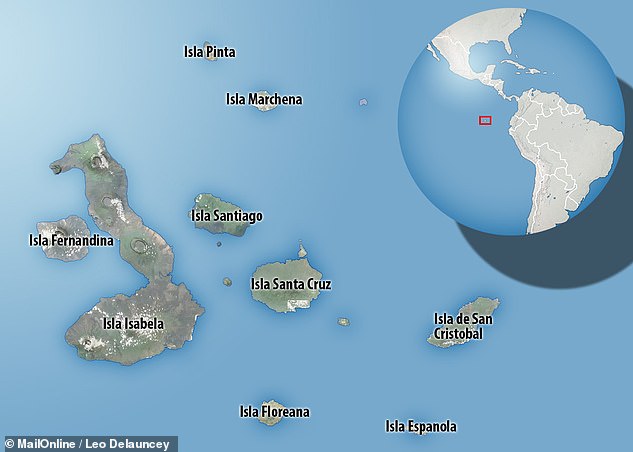 Scientists that the organisms clung onto ships from around the world eventually settling in their new environments. The impact on the islands’ ecosystems is not yet known but it is likely to threaten the islands’ hundreds of endemic marine species

The study noted that it is unknown what the impact of these alien species on the ecosystem is.

But it is likely to be negative judging from experiences elsewhere, and could threaten the islands’ hundreds of endemic marine species.

‘What we know is a number of these [invasive] species clearly have had impacts elsewhere in the world,’ said Professor Carlton.

The team warned that invasions, including soft corals that could grow rapidly over local coral.

The Galapagos Marine Reserve is protected, but they say it will be hard to stop more invaders because it’s difficult to check for tiny species on the hull of every boat.

WHAT ARE EARTH’S PROTECTED AREAS?

In 2010 the International Union for Conservation of Nature established Earth’s protected areas.

These were first described in 2008 as ‘a clearly defined geographical space, recognised, dedicated and managed, through legal or other effective means, to achieve the long term conservation of nature with associated ecosystem services and cultural values.’

The IUCN claims  that the global network of protected areas stores at least 15 per cent of terrestrial carbon.

They were set up with three specific goals in mind: 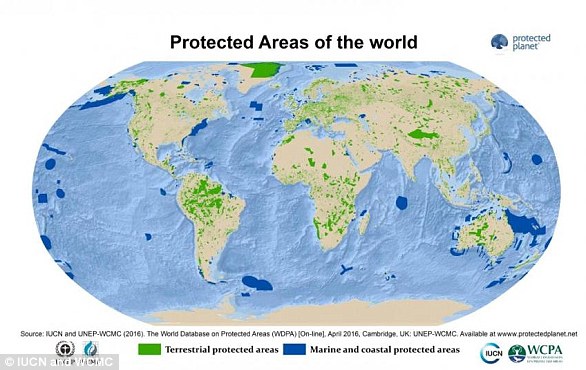 In 2010 the International Union for Conservation of Nature set up and clearly established Earth’s protected areas. There are now more than 202,000 areas across the globe