With no tills, no cash and no cards, Amazon’s new shops are bemusing

Resisting the urge to run, I remain calm as I step out of the Amazon Fresh store on Kensington High Street in London. I’ve just put some goods in my bag, but have not handed over any cash or waved my debit card over a card reader so that payment can be taken. I feel as if I have shoplifted for the first time in my life, but I haven’t.

Faceless recognition: Toby Walne with his purchases outside the Kensington store where weight sensors on shelves and cameras mean there are no tills

Far from it. I’ve just experienced the future of shopping in the UK – one that doesn’t involve using cash or a card.

If you thought those confounded automatic checkouts at supermarkets were bad, think again. This bizarre, high-tech store does away with all checkouts – peopled or automatic. You walk in, pick up your groceries, then leave with your bag of goods. No counter, no checkout, no sales staff.

Amazon has branded this new experience as ‘just walk out’ shopping. There are already 17 such stores in London but, if successful, they could soon spread across high streets up and down the country. Experts predict there could be 300 Fresh stores opening nationwide over the next five years.

And what Amazon does, others such as Tesco and Sainsbury’s copy – especially if it drives down costs and pushes up profits.

Amazon’s logic is that a till represents a ‘friction point’. By removing it, a shopping barrier has been lifted. Taking away friction points such as queues encourages shoppers to spend more than they may want, more often.

I was lured into the store last Wednesday by a red flag waving in the breeze, proclaiming ‘£10 off your first shop’. Sensing a bargain, I joined others eager to enter the store.

A female assistant came over to help. Straightaway, she clocked she was dealing with a technology dinosaur. Patiently, she showed me how to download the Amazon account app on my mobile phone, then click on a ‘fresh code’. This QR code granted me access to the store. I swished it across a reader and a barrier opened.

The size of a high-end mini-market – like a Sainsbury’s Local or Little Waitrose – the store offered sandwiches, crisps and other snacks. There was a small bakery section, alcohol (that I could not use my £10 discount on), basic frozen foods and household essentials such as toothpaste and soap. There were no shopping trolleys, just a bag into which you place the items you want.

Strolling round, I picked up a sandwich, a tub of olives, a smoothie and a couple of chocolate bars. I then stepped in front of the exit barrier and it opened.

It all felt odd and slightly uncomfortable. It was not until nine in the evening – eight hours later – that an email arrived itemising my purchases and telling me that I had spent £11.71 (until then, I had no idea how much I had spent).

Had I purchased the same items at a local Sainsbury’s store, the bill would have totted up to £8.65 – so the convenience of Amazon had cost me £3.06 more.

Amazon puts the bills together by using ‘sensor fusion and deep learning’ to find out what is in your cart. This includes ultra-sensitive shop shelves that can tell what you have picked up to buy by its weight. 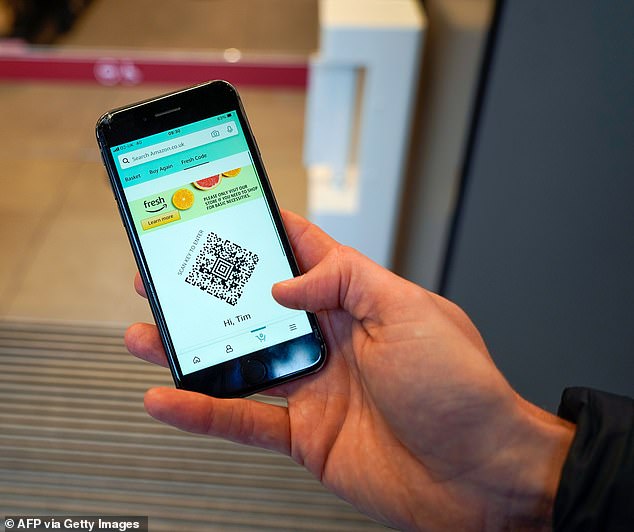 Cashless: A QR code on the Amazon Fresh app grants you access to the store – swish it across a reader and a barrier opens

Although it claims not to use Big Brother computers to identify customers – it prefers the term ‘computer vision’ – this is double-speak. There are dozens of cameras in the ceiling pointing at customers and the shelves, enabling Amazon to identify it is you picking up the goods.

Dennis Reed, director of Silver Voices, a campaign group for the elderly, is among those unimpressed by frictionless shopping. He says: ‘This technology is sinister – it does away with the human touch that keeps society together. It is already disturbing that staff at many supermarkets are being replaced by automatic scanning checkouts. This latest development will no doubt be wonderful for its profits, but it dehumanises a friendly experience.’

Reed is also concerned that it discriminates against those who do not have – or want – an Amazon account. You need a smartphone to download the app that gets you into the shop. Without it, you are effectively barred. The Federation of Small Businesses is also sceptical, believing many customers will struggle to embrace a shop without counter staff. Michael Weedon, its head of retail, says: ‘Small businesses love technology, but do not have the resources to compete against the likes of Amazon.

‘People are not like sheep and will decide for themselves if they want someone to smile and say hello when they go to the shops – or just convenience. I don’t believe this new shopping model will take over the high street.’

Amazon recorded UK sales of more than £20billion for 2020 and paid ‘direct taxes’ of nearly £500million. The US giant channels much of its UK income through tax haven Luxembourg.

The company has also opened a two-storey barbershop in East London called Amazon Salon. It uses ‘latest industry technology’ to show customers what their hair would look like using different styles and cuts. Roberts believes Amazon supermarkets could be open within the next decade.

He also believes that swishing a smart phone to get into a store will be replaced by other technology such as retinal scanning, fingerprints or facial recognition. He says: ‘In the future, we might even get tiny microchips embedded under the skin on our hands so we can pay by simply waving a hand.’

This already happens in Sweden.

Amazon said it was delighted that The Mail on Sunday was ‘reaching out’ to discuss its Fresh stores – but failed to provide any comment on the venture. In the US, it has a different name for its grocery stores – Amazon Go – with 25 outlets using the strapline of ‘take it away and get back to your day’. The stores are designed to ‘offer customers everything they would want from their local neighbourhood grocery store’.

Roberts says that in time Amazon will be able to use ‘artificial intelligence’ to predict what people will buy as they wander around a store.

He says: ‘The software is already out there that seems to be able to read your mind. By plotting past shopping habits it has a good idea of what you might want to buy. It can even ‘ping’ your phone inside a shop to prompt you to remember certain potential purchases or highlight special offers on the goods that you might like.’

It means that in the future, shopping might involve no need to think about what you actually want to buy, no staff to operate tills or any need to get out a wallet or purse. Just the casual wave of a hand to access the store.

My verdict? No thanks. Old-fashioned shopping may at times be inconvenient and annoying, but it is far more pleasurable than being made to feel like a shoplifter.