ASK THE GP: I’ve had a runny nose for almost 30 years

My nose has not stopped running for almost 30 years. If I bend forwards or sit for a meal, it drips on my shirts. I’ve been told I cannot have certain treatments for it because they interfere with the action of warfarin, which I take to reduce blood clots. Surely there is something that can help?

You have vasomotor rhinitis, to give the condition its medical name — more commonly known as chronic non-allergic rhinitis. Put simply, it’s swelling in the nasal passages that’s not due to an allergy. (Typically rhinitis is caused by an allergic response to airborne triggers, such as pollen, animal dander and dust.)

Chronic non-allergic rhinitis appears to affect 15 to 20 per cent of adults. Essentially, it’s a reaction triggered by sensitivity in the lining of your nose which leads to symptoms such as sneezing, nasal congestion and streaming.

Chronic non-allergic rhinitis appears to affect 15 to 20 per cent of adults. Essentially, it’s a reaction triggered by sensitivity in the lining of your nose which leads to symptoms such as sneezing, nasal congestion and streaming

Although the cause is not well understood, we believe there are abnormalities in the control of the blood vessels of the nasal lining, adversely affecting the mucus-secreting cells and causing continuous over-production.

Fortunately, there are effective treatments to control the symptoms — usually in the form of nasal sprays such as Rinatec. Here, the active ingredient is ipratropium bromide, which works by drying up the mucus-producing cells.

However, as you’ve been told, your case is complicated by the fact that you are taking warfarin.

In theory, additional medications may upset the balance of how your blood clots by interfering with the action of the warfarin. But this should not automatically rule out treatments for you.

The key thing is to ensure that if you’re prescribed anything new while taking warfarin, your GP gives you weekly blood tests to monitor the clotting mechanisms — the warfarin dose can then be adjusted accordingly.

An alternative for you would be swapping the warfarin for one of the newer anticoagulant drugs (rivaroxaban, for example) that are not upset by medication interactions the way warfarin is. 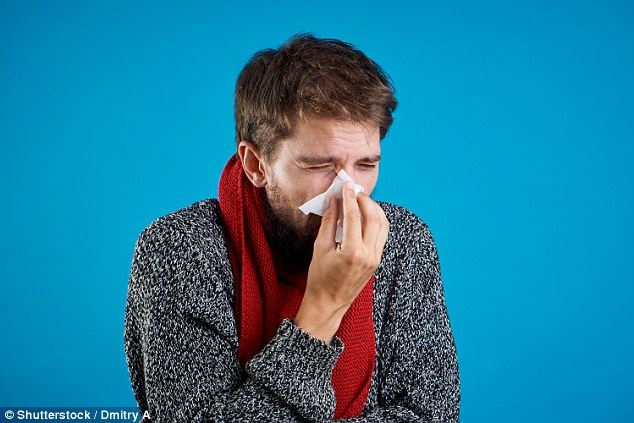 Though most antihistamines won’t work for your condition because it is non-allergic, this drug has been shown to be effective

In your case, I’d first ask your GP about azelastine intranasal spray, an antihistamine.

Though most antihistamines won’t work for your condition because it is non-allergic, this drug has been shown to be effective.

Interestingly, there’s emerging research to suggest that perhaps there is a local allergic-type reaction taking place within the nasal lining in chronic non-allergic rhinitis that can’t be detected by the usual tests.

So it is possible that azelastine is effective due to a suppressant effect on the localised allergic response. Or that it has anti-inflammatory effects that aren’t yet fully understood.

A combination of azelastine with the steroid fluticasone (a prescription-only medication available as a nasal spray, brand name Dymista), is recommended if your GP will agree.

This year, I’m really going to look after my brain with two activities proven to help.

First, I plan to continue my regular weight-lifting sessions — sometimes daily, more often two to three times a week, all over in 20 minutes — which are quite a chore and not a lot of joy, but known to preserve brain function. I am also determined to retrain myself into sleeping for eight hours every night.

All my adult life I’ve had to be a lark, up at 5am or 4am to get ahead of the day, but now I have learnt what damage that does to the brain and immune function. Watch this space!

I have a heart murmur due to a blocked valve. I also have angina. Am I at risk of heart attack? I am 83.

Name and address not supplied.

From what you tell me, it sounds as if you have aortic stenosis — where there is narrowing of the aortic valve.

Blood passes through this valve from the heart’s main pumping chamber (the left ventricle) and into the aorta, the main artery that takes blood to the rest of the body.

There are three flaps that make up the valve which are usually flexible and elastic, but in aortic stenosis they become stiff and scarred. This means the opening is narrowed, so blood flow is reduced and the heart must work harder to pump blood through.

The most common cause is ageing. But if you’ve had illnesses such as rheumatic fever in childhood, this can also cause the ‘narrowing’ scar tissue to form.

A GP may refer patients for an echocardiogram to confirm this diagnosis after listening to the heart with a stethoscope, as a ‘murmur’ can be heard (this occurs when the heart contracts, causing turbulent blood flow through the narrow or leaky valve).

Why I’m worried about…

The news yesterday of an ‘explosive gel’ that can work 12 times faster than Viagra is, I am sure, going to be welcomed by many.

Made from nitroglycerin, an explosive, it helped seven in ten men achieve an erection within minutes in tests.

All good, you might think. But I’m concerned that the gel, which in theory could be bought over the counter as easily as cough medicine, may encourage men who have no medical need for it to try it.

Worse, men whose erectile dysfunction could be linked to a serious problem, such as undiagnosed heart disease, could simply buy it in the supermarket and miss out on the potentially life-saving medical attention they need.

Early on in the condition, most people have no symptoms. But if it’s severe, for example when the valve is so narrow the output from the heart is seriously restricted, patients may develop problems such as shortness of breath, dizziness or fainting and, in some cases, chest pain.

It seems that you have mild stenosis — so symptoms are unlikely to become serious over the next five years, though slow, silent progression in the narrowing of the valve is likely.

Your question is: does this lead to an increased risk of heart attack?

A heart attack occurs when a clot blocks blood flow in one of the coronary arteries that supply the heart muscle — but this is not a complication of aortic stenosis.

That’s because the coronary arteries exit above the valve that has scarring in your case, and the two issues are not necessarily linked.

It may be that you have clogged coronary arteries — common with age — but this would be an entirely separate problem and not due to aortic stenosis.

One factor to bear in mind is that because your heart has to work harder when the aortic valve is narrowed, over time, the muscle of the heart can thicken due to the extra load, which can have its own complications.

As you say in your longer letter, your cardiologist reassured you that your heart is pumping well. And the medicines you have been prescribed — candesartan and amlodipine tablets for blood pressure control, aspirin to make blood less sticky and simvastatin to lower cholesterol — will lower your risks further.

Regular scans to check the disease progression will also help keep you at ease.

Write to Dr Scurr at Good Health, Daily Mail, 2 Derry Street, London W8 5TT or email drmartin@dailymail.co.uk – include your contact details. Dr Scurr cannot enter into personal correspondence. Replies should be taken in a general context and always consult your GP with any health worries.

Recently, the NHS announced it is backing a programme to help double the number of volunteers working in hospitals, with the suggestion that they will carry out tasks medical staff are too busy to do.

This is confirmation, if one needed it, that after years of cutbacks, austerity and rising demand, the final drops of blood have been squeezed from the NHS stone.

For, although volunteers have been part of the NHS since its inception, typically their roles have been limited to running hospital shops or pushing trolleys selling toiletries, stationery and snacks. But now, with the company HelpForce, it is hoped they will work on the hospital wards, fetching equipment, running to the pharmacy, helping at mealtimes and driving patients home.

As a junior doctor, I saw first-hand how grateful patients were for the volunteers and their trolley service. But I fear there will be inevitable bureaucratic difficulties.

When I was the medical director of a hospice, I set up a transport service for elderly relatives to use after a long vigil sitting with a husband, wife or partner who was dying — the idea was that when they needed to get home late at night, a volunteer would drive them.

But in the end, not one person was ever transported home as every objection was put forward by members of the charitable organisation that had offered to run it, from ‘insurance difficulties’ to health and safety.

And now, 30 years later? Training, annual appraisal, proof of identity, chaperones, etc will all be mandatory. I can see an endless list of concerns and regulations which, along with the roadblocks that doomed my transport system years ago, will stand in the way of HelpForce.

The fact is that in the NHS, box-ticking and political correctness take precedence over almost everything else, and what might be a worthwhile enhancement on the wards will inevitably fail. I watch with sadness.