Could pumping your BLOOD through a machine help prevent heart attacks?

For decades, patients have been told that the way to lower their risk of heart disease and stroke is to reduce their cholesterol.

Yet many people who have low cholesterol, and even patients with high cholesterol who manage to reduce their levels, still go on to have strokes and heart attacks.

Scientists now believe other culprits are involved. Indeed, study after study has pointed to one factor in particular: lipoprotein(a) — or Lp(a) — a fatty particle found in the blood.

Apheresis, in which blood is pumped through a machine to remove a particular substance – in this case Lp(a) – before returning it to the body, could be potentially helpful, albeit extremely invasive.

It is one of the lipoproteins in the blood (which includes the ‘bad’ LDL variety) that are thought to be made in the liver and attach themselves to cholesterol particles.

While LDL transports cholesterol from the liver to cells where it’s used to strengthen cell walls and make hormones, ‘good’ HDL does the opposite, taking surplus cholesterol back to the liver, where it is recycled or removed from the body in bile.

Unlike LDL and HDL cholesterol, the exact role for Lp(a) isn’t yet clear, and its levels are not picked up in routine blood tests.

But studies are suggesting that as levels of it rise, so do the risks of cardiovascular disease.

HOW CAN F.A.S.T SAVE YOU DURING A STROKE?

The main symptoms of stroke can be remembered with the word F.A.S.T.

This will help you more quickly identify someone having a stroke.

Research shows that a healthy diet and regular exercise have almost no impact on Lp(a) levels, while cholesterol-lowering drugs don’t touch them.

Significantly, our levels of Lp(a) are determined by our genes.

‘I rate it just below LDL in terms of importance – I have seen heart attack patients with low LDL levels.’

Professor Jeremy Pearson, associate medical director at the British Heart Foundation, adds: ‘There is good evidence Lp(a) is one causal pathway for risk of coronary heart disease and measuring it would be valuable.

‘People who have high levels would have increased risk of heart attack and stroke even though their LDL concentration wouldn’t be raised,’ he said.

It’s thought Lp(a) may help repair damaged cells or prevent infections as it can bind to various factors in the blood.

But this ability has its downsides, as it also affects the action of proteins that break down clots. So it effectively accelerates the blood’s clotting ability and leads to the formation of sticky plaques in the arteries.

Lp(a) is also thought to raise inflammation in blood vessels.

A 2009 paper by the University of Cambridge, published in the journal JAMA, reviewed data and concluded that Lp(a) is a cause of cardiovascular complications such as heart attack, and should be investigated as a target for new treatments. 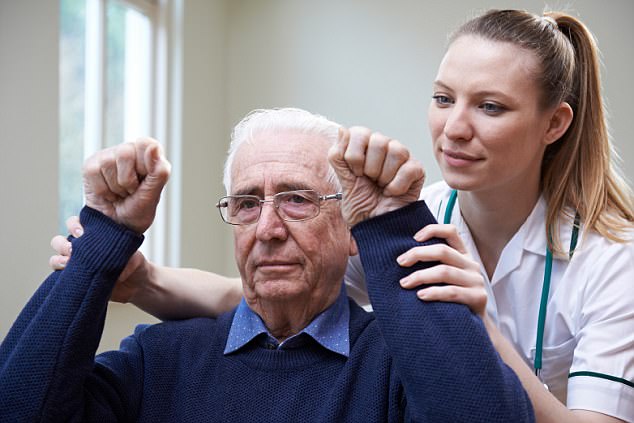 Apheresis, where blood is pumped through a machine, could possibly lower Lp(a) in the blood

The problem is that Lp(a) levels aren’t picked up in standard blood tests — they are only ever checked by cardiologists in special lab tests called assays, used for very high-risk patients.

And, as it is such as emerging area, even if these assays show that Lp(a) levels are high, there aren’t specific treatment options available to lower them.

WHAT IS CORONARY HEART DISEASE?

Coronary heart disease (CHD) is a major cause of death both in the UK and worldwide. CHD is sometimes called ischaemic heart disease.

However, not everyone has the same symptoms and some people may not have any before CHD is diagnosed.

Coronary heart disease is the term that describes what happens when your heart’s blood supply is blocked or interrupted by a build-up of fatty substances in the coronary arteries.

Over time, the walls of your arteries can become furred up with fatty deposits. This process is known as atherosclerosis and the fatty deposits are called atheroma.

You can reduce your risk of getting CHD by making some simple lifestyle changes.

‘But niacin, a B vitamin, has many side-effects at the high doses needed to lower Lp(a),’ says Dr Barbir, ‘and PCSK9 inhibitors are not approved for Lp(a)-lowering and are expensive, so not offered to many patients.’

Nevertheless, he adds, there is hope on the horizon in the form of a drug called AKCEA-APO(a)-LRX, which inhibits the production of a protein that forms part of Lp(a). The treatment is being trialled in the U.S. ‘This new injected drug is coming in the next year or two and so far is very, very promising,’ explains Dr Barbir.

Another option is apheresis, he says, where blood is pumped through a machine to remove a particular substance — in this case Lp(a) — before returning it to the body. But Dr Barbir warns this is quite an invasive procedure and is time-consuming, with a session taking up to three hours.

Under UK guidelines, apheresis should be offered to patients with Lp(a) levels above 60mg/100ml, either with recurring cardiovascular events or in conjunction with uncontrolled elevated LDL.

But according to a paper published last year in the Journal of the American College of Cardiology, the risk of heart attack rises significantly with Lp(a) levels above 30mg/100ml.

Another emerging, though controversial, idea is that certain medications to lower LDL may increase levels of Lp(a).

Some researchers argue the risk is offset because the fact that LDL is lowered significantly is enough to reduce the risk of heart attacks and strokes. But a study with the statin rosuvastatin showed it did not reduce the risk of cardiovascular disease, and even increased Lp(a) levels by 20 per cent.

This might explain why some patients still have heart attacks despite medication. The theory is that most of these patients’ cholesterol is attached to Lp(a), rather than LDL — and statins work specifically on LDL.

‘There are still a lot of unanswered questions with regard to Lp(a), and many doctors are still unaware of its role,’ says Dr Barbir.