In an interview with Fox News due to be broadcast on Thursday, Zuckerberg claims that it is not the place of private companies to interfere in what people say online.

Twitter CEO Jack Dorsey immediately fired back saying that the site would continue to call out ‘incorrect or disputed information’ about elections shared by users.

The spat between Zuckerberg and Dorsey came after Trump said he will sign some sort of ‘social media’-focused executive order on Thursday amid the rift with Twitter over the fact-checks on his tweets. 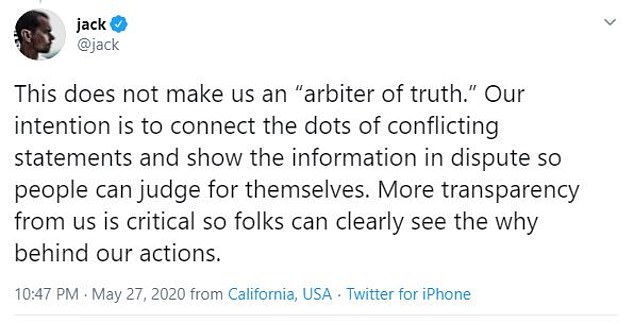 In his interview with Fox, Facebook’s Zuckerberg said that it was not the place of the company to act as an ‘arbiter of truth’.

‘I just believe strongly that Facebook shouldn’t be the arbiter of truth of everything that people say online,’ he added.

‘Private companies probably shouldn’t be, especially these platform companies, shouldn’t be in the position of doing that.’

Twitter’s Dorsey immediately took issue with the comments, clapping back that the decision to fact-check ‘does not make us an “arbiter of truth.”’

‘Fact check: there is someone ultimately accountable for our actions as a company, and that’s me. Please leave our employees out of this. We’ll continue to point out incorrect or disputed information about elections globally. And we will admit to and own any mistakes we make,’ he wrote.

‘This does not make us an “arbiter of truth.” Our intention is to connect the dots of conflicting statements and show the information in dispute so people can judge for themselves. More transparency from us is critical so folks can clearly see the why behind our actions.

Twitter’s CEO Jack Dorsey immediately took issue with Zuckerberg’s comments Wednesday, clapping back that the decision to fact-check ‘does not make us an “arbiter of truth”‘

‘Per our Civic Integrity policy, the tweets yesterday may mislead people into thinking they don’t need to register to get a ballot (only registered voters receive ballots),’ he added.

‘We’re updating the link on @RealDonaldTrump’s tweet to make this more clear.’

The growing rift between the Facebook and Twitter founders came after President Trump said he will sign some sort of ‘social media’-focused executive order on Thursday.

Early Wednesday, Trump demanded social media platforms ‘clean up your act’ as he warned his administration will begin to regulate and even shutter such websites after Twitter, for the first time ever, fact-checked his tweets.

‘I have to understand what they actually would intend to do,’ Zuckerberg told Fox in response to the president’s warning. 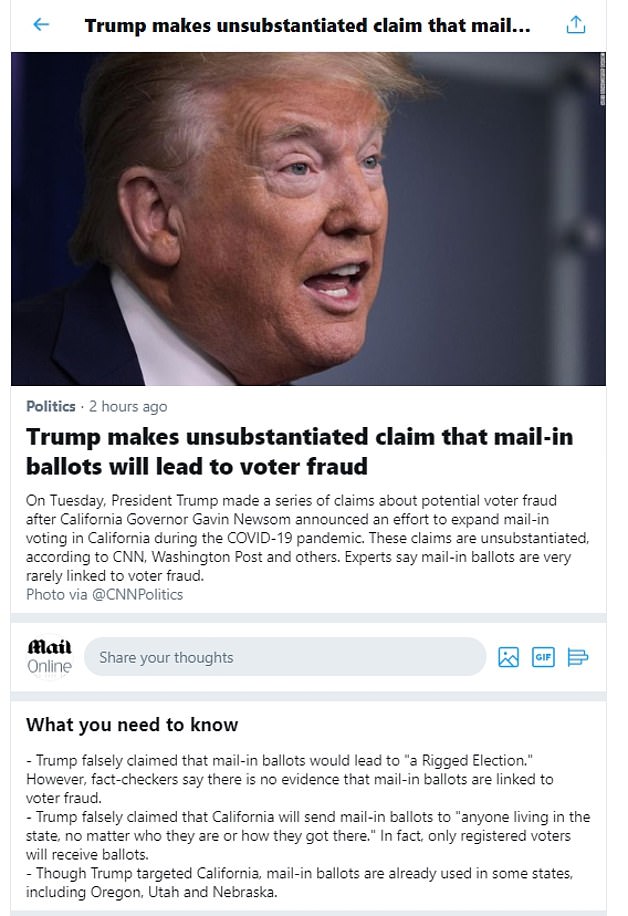 Users who clicked on the blue exclamation marks are then redirected to a page explaining why the claim was unsubstantiated, including an assertion that Trump’s claim are ‘false’ and that there is ‘no evidence’ that vote-by-mail was linked to voter fraud

‘But in general, I think a government choosing to censor a platform because they’re worried about censorship doesn’t exactly strike me as the right reflex there.’

Trump issued the warning after reacting with fury to having two of his tweets labelled as misleading Tuesday, with links to news articles suggesting they were false attached.

The dubious tweets from the president suggested that California’s mail-in balloting initiative would lead to substantial voter fraud in the November general election.

Twitter had labeled the tweets with a blue exclamation mark prompting users to ‘get the facts about mail-in ballots’.

Another page on the social media site called Trump’s tweets ‘unsubstantiated,’ according to fact-checkers from CNN, Washington Post and other mainstream news outlets.

‘These tweets contain potentially misleading information about voting processes and have been labeled to provide additional context around mail-in ballots,’ a statement from Twitter read.

In contrast, on the same day, Twitter’s Jack Dorsey refused to take down the president’s tweets where he touted a conspiracy theory that MSNBC host Joe Scarborough was involved in the death of a staffer when he was a Republican U.S. congressman from Florida.

Facebook has previously faced backlash from users who feel the site does not to enough to battle the spread of misinformation.