Falling for fabulous Ferrara, a city of pasta and palaces

The walls around Ferrara were built to repel enemies. Now, though, the wars that kept medieval Italy busy are a distant memory, and those same walls feel more like the packaging around a scrumptious selection of sweets.

Constructed of brick in shades of strawberries and cream and wrapped in a ribbon of scented acacia trees, they are a delightful promenade.

Inside them, the palaces and piazzas of this splendid little city, the domain of the d’Este family, are packed as compactly as chocolates in a box.

The walls around Ferrara were built to repel enemies. Now, though, the wars that kept medieval Italy busy are a distant memory, and those same walls feel more like the packaging around a scrumptious selection of sweets

A short drive or train-ride from Bologna’s airport, Ferrara is easily accessible for a weekend break. It has art to rival that in Florence but without the crowds or queues. Palaces, a market alongside a Gothic cathedral, and beautiful squares or gardens in which to picnic.

Here’s how to enjoy it.

Cars can’t penetrate the narrow streets of the medieval quarter, and are banned from the grand boulevards of the Renaissance town.

Walking is a pleasure, but the locals all pedal – they coast slowly and carefully over the cobbles.

The elderly gentlemen, who congregate in the main piazza at dusk, chat astride their bikes. Women ride home from Mass, tweed skirts neatly arranged. Most hotels provide bikes.

QUEENS OF THE CASTLE

The Castello Estense rises, tremendous, from its moat in the centre of town. Its exterior is magnificently grim, its inside lavishly frescoed.

They were Lucrezia Borgia, illegitimate daughter of a pope, whose reputation as a golden-haired, poison-dispensing femme fatale obscures her real achievements as a patron of scholars and poets.

Her sister-in-law and rival, Isabella d’Este, became the ruler of Mantua, and, lastly, Parisina d’Este, was the wretched child bride who was murdered in a dungeon along with the step-son with whom she’d unwisely fallen in love. 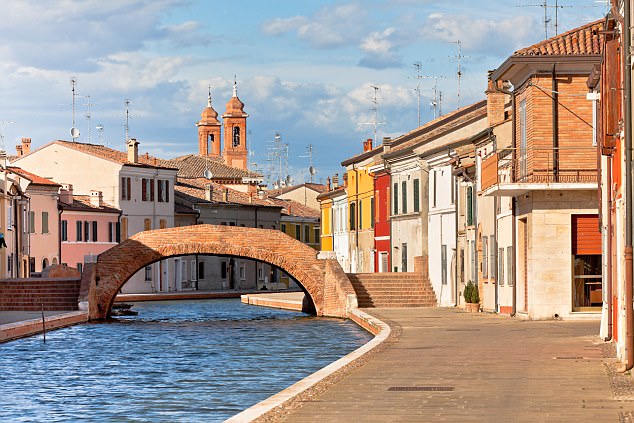 Cars can’t penetrate the narrow streets of the medieval quarter, and are banned from the grand boulevards of the Renaissance town

The Palazzo Schifanoia (whose name means ‘banish boredom’) is all about pleasure. It was built as a summer house and party venue for the Renaissance court, and its main salon is decorated with exquisitely beautiful frescoes showing courtiers in gorgeous damask robes and labourers in tatters, mythical beasts and endearing dogs.

In the garden behind, shaded by magnolia trees, there’s a boho cafe where you can eat lunch to the sound of jazz.

The Ferrarese speciality is cappellacci (literally ‘big bad hats’) di zucca — ravioli stuffed with sweet, spicy pumpkin, eaten with ragu or butter and sage. Pumpkin also turns up in soups and in a delectable flan (as a kind of mousse).

When you tire of the sweet pumpkin, order the other favourite – a platter of locally produced prosciutto and salami, and slather your bread with the creamy-soft crescenza cheese.

The attendant lords and ladies at the d’Este court built extravagant homes, competing to achieve the most splendid. Walk past the façade of the Palazzo Bentivoglio, whose kindly name (‘I wish you well’) is contradicted by the clusters of carved weapons and armour decorating its white marble facade.

Go into the Palazzo Paradiso, now the university library, where the lucky students sit reading under painted rococo ceilings, all rosy clouds and cherubs perched on swags of mauve and pistachio-coloured silk.

The Palazzo dei Diamanti houses the main art gallery. Look out for the surreal 15th-century painting of a bear chained up in an otherwise deserted city.

Spare a day for Bologna. It’s a busy, sophisticated city whose arcades are full of idiosyncratic shops selling everything from 19th century tin toys to silk brocades. Its university (the oldest in Europe) is housed in a number of gorgeously decorated palaces full of oddities. Don’t miss the anatomy theatre and the unicorn’s horn.

A three-night break in Ferrara starts from £648pp staying at the Hotel Ferrara, including flights, transfers, breakfast, Kirker’s Guide Notes to restaurants and sightseeing, and the services of the Kirker Concierge.