Joe Kennedy III laughs off jokes about his glossy lips

Joe Kennedy III, the charismatic young Democrat who was chosen to deliver the traditional State of the Union rebuttal, laughed off jibes about his shining moment on Tuesday morning.

The 37-year-old, who is the grandson of Robert. F. Kennedy and is the Dem. Rep. for Massachusetts, appeared on Good Morning America on Wednesday to discuss his blistering attack on Trump and the Twitter reaction his glossy look received.

He described his speech as an ‘extraordinary honor’ and said he ‘had fun’ delivering the remarks.

It was a monumental moment for the young Democrat and one which many interpreted as his first speech as a potential future presidential candidate.

Unfortunately, others could not see beyond his wet mouth to listen to the words coming out of it.

Twitter erupted with jokes about his ‘drool’ and Trump fans rejoiced in the faux-pas.

Dried off: Joseph Kennedy III’s lips had no sheen whatsoever when he appeared on Good Morning America on Wednesday to laugh off his previous night’s glossier look 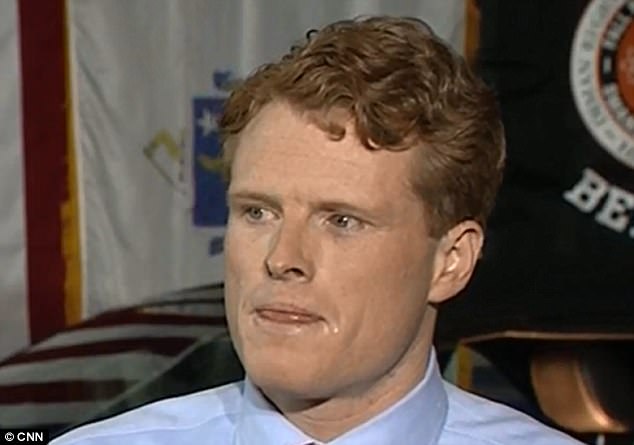 On Tuesday, the 37-year-old’s State of the Union rebuttal was overshadowed by his glistening lips 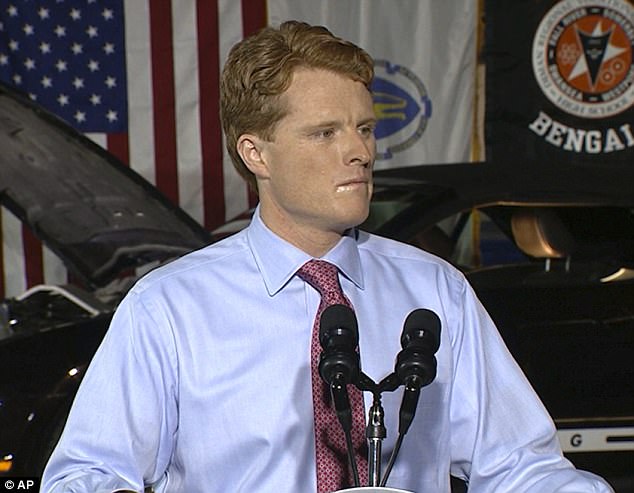 Kennedy spoke from Fall River, Massachusetts, and addressed Americans’ concerns that Trump’s heated rhetoric has turned the country into us-versus-them in his speech.

‘Where in order for one to win, another must lose,’ Kennedy said. ‘As if the mechanic in Pittsburgh and the teacher in Tulsa and the daycare worker in Birmingham are somehow bitter rivals, rather than mutual casualties of a system forcefully rigged for those at the top.’

‘As if the parent who lies awake terrified that their transgender son will be beaten and bullied at school is any more or less legitimate than the parent whose heart is shattered by a daughter in the grips of opioid addiction,’ Kennedy said.

While President Trump spent part of the State of the Union telling Americans they can ‘achieve absolutely anything’ while touting the strong economy, Kennedy said he’s seen Americans, over the past year, feeling ‘anxious, angry, afraid.’

‘We see an economy that makes stocks soar, investor portfolios bulge and corporate profits climb but fails to give workers their fair share of the reward,’ the 37-year-old congressman added.

The young Democrat condemned Russia being ‘knee-deep in our democracy’ and ‘hatred and supremacy proudly marching in our streets,’ a reference to what happened in Charlottesville in August 2017, when a counter-protester was run down by a Nazi sympathizer and President Trump referenced good people on ‘both sides.’

‘Bullets tearing through our classrooms, concerts and congregations. Targeting our safest, sacred places,’ Kennedy continued. ‘And that nagging, sinking, feeling, no matter your political beliefs: this is not right. This is not who we are.’ 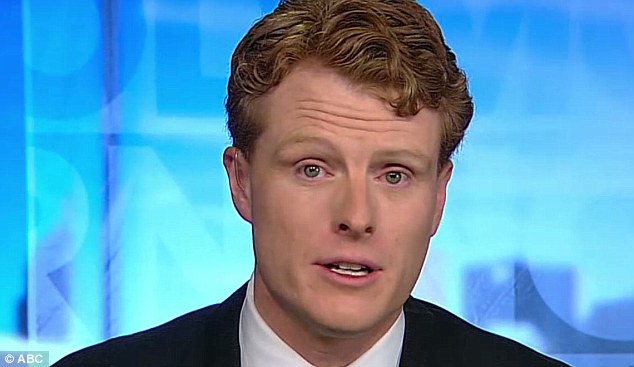 Good sport: On Wednesday, Kennedy said it was an ‘extraordinary honor’ to give the speech 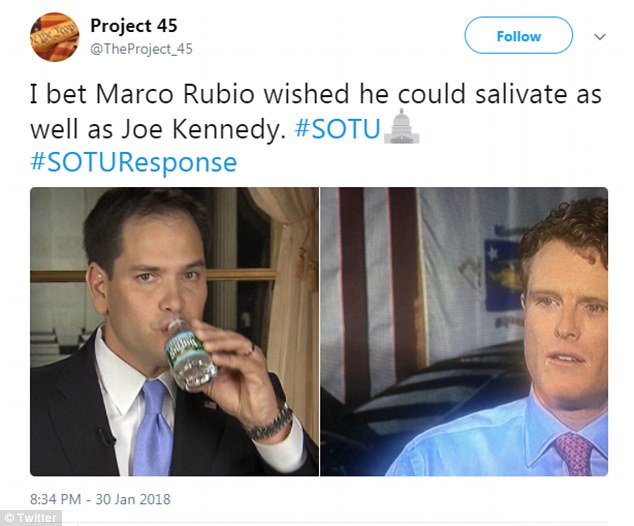 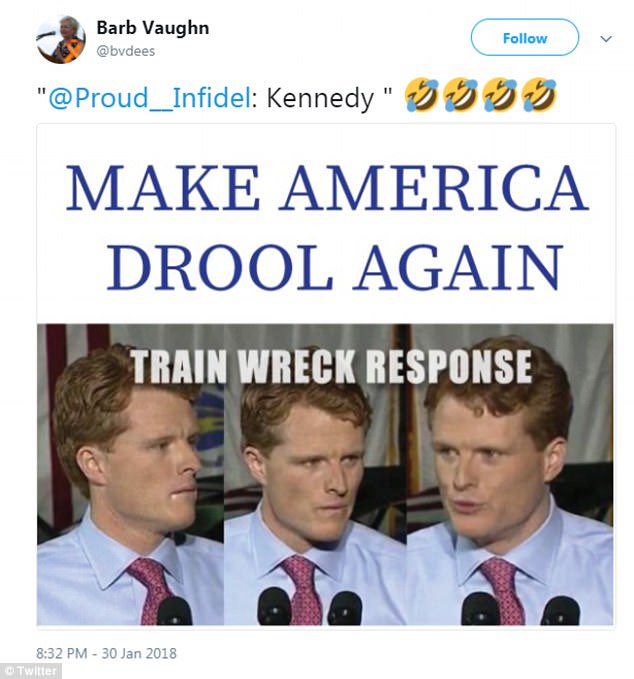 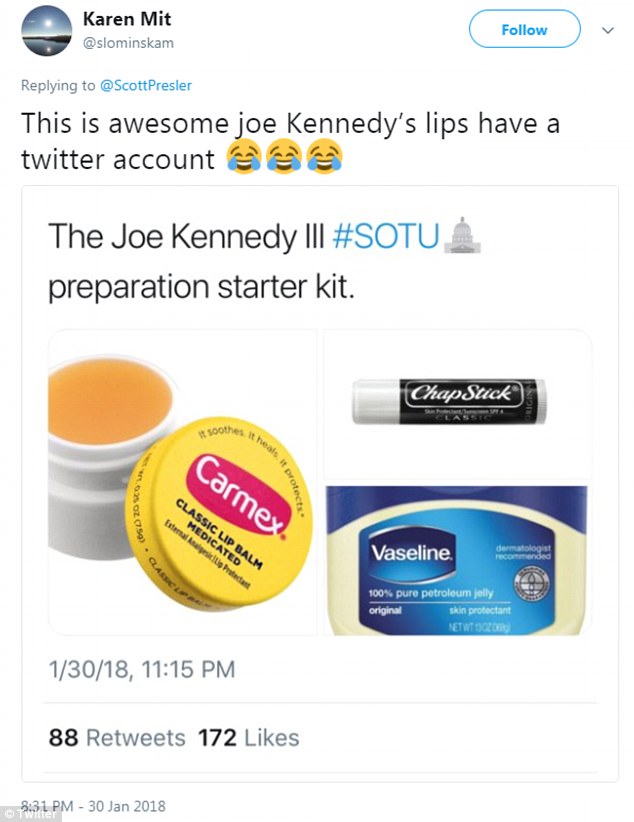 The congressman said it would be easy to blame partisanship and politics or dismiss the last year as ‘chaos.’

‘But it’s far bigger than that,’ he warned. ‘This administration isn’t just targeting the laws that protect us – they are targeting the very idea that we are all worthy of protections.’

‘For them, dignity isn’t something you’re born with but something you measure: By your net worth, your celebrity, your headlines, your crowd size,’ he said. ‘Not to mention the gender of your spouse, the country of your birth, the color of your skin, the God of your prayers.’

Kennedy railed that that was against the American ideal, in which people are equal and worthy.

‘But today that promise is being broken,’ he said. ‘By an administration that callously appraises our worthiness and decides who makes the cut and who can be bargained away.’

Democrats, he pledged, wouldn’t choose one American over the other.

‘We choose both. We fight for both,’ he said.  ‘Because the strongest, richest, greatest nation in the world shouldn’t leave any one behind.’

‘Bullies may land a punch. They might leave a mark. But they have never, not once, in the history of our United States, managed to match the strength and spirit of a people united in defense of their future,’ he said.

In its choice of Kennedy, the Democratic Party, looked back to its past and toward the future.

A millennial in his own right, the congressman joined Snapchat this week to detail his preparation for the speech. 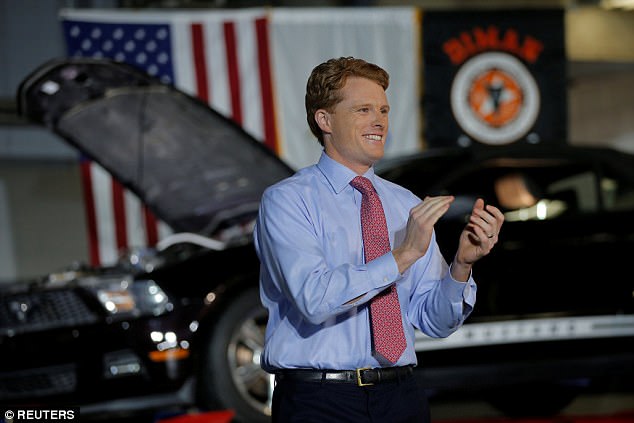 While the content of the speech, hit on many issues Democrats care about, the internet seemed fixated on Rep. Joe Kennedy III’s well-greased lips 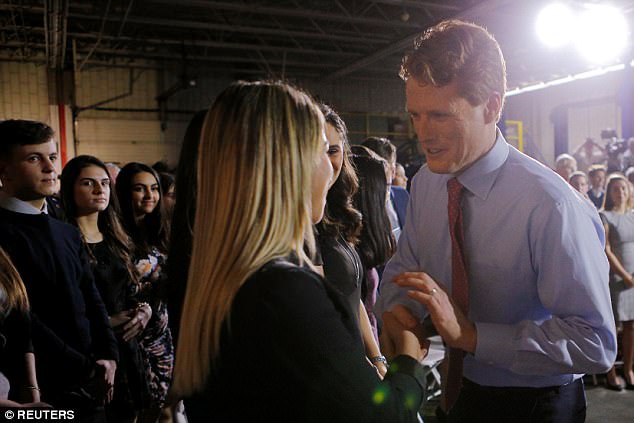 Rep. Joe Kennedy III (right) greets an audience member after he delivered the State of the Union’s Democratic rebuttal 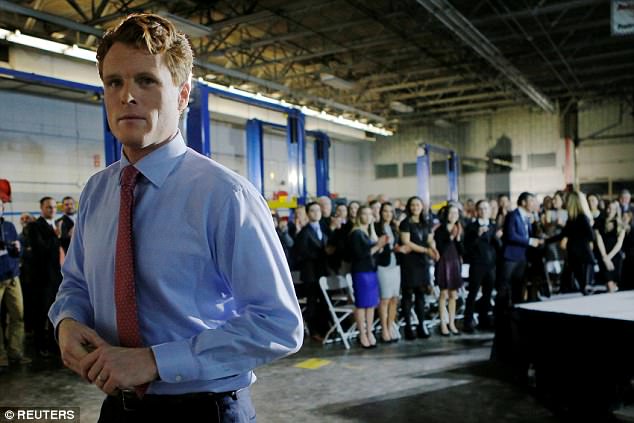 Rep. Joe Kennedy is photographed leaving the stage after giving the Democrats’ official response to the State of the Union 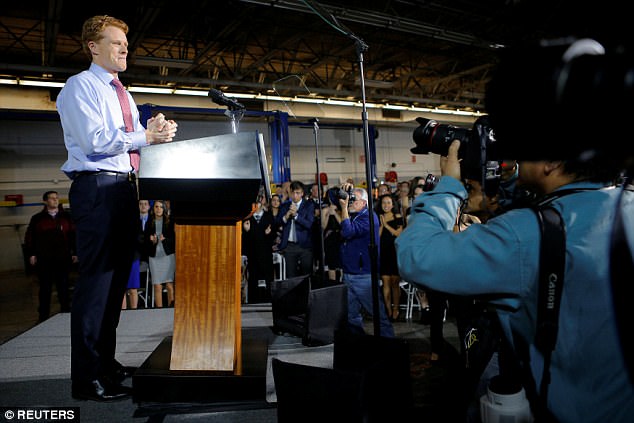 He told audience members, and the greater public, that the Democratic Party chose ‘both’ – for both the parent of a transgender student and a parent of an opioid addict

But older Democrats likely appreciated that Kennedy is living up to his family name, as he’s the grand son of Robert F. Kennedy, which would make President John F. Kennedy and Sen. Ted Kennedy, the congressman’s late great uncles.

Republicans welcomed the pick with glee, suggesting he’s just another limousine liberal like Hillary Clinton, as the young Kennedy is a multi-millionaire.

‘Democrats using the multi-millionaire scion of a political dynasty as the face of their party shows they’ve learned absolutley,’ Matt Gorman, a spokesman for the House Republicans’ political arm, giddily told ABC News.

Instead of holding the speech in the autoshop at Diman Regional Technical School, Gorman said it should have been filmed ‘live from the Kennedy Compound in Hyannis.’

The speech is one of the most tricky to handle in politics, as it’s sometimes predicted future success – though has also produced some unshakable meme-worthy moments.

Both Speakers Nancy Pelosi and Paul Ryan delivered a State of the Union rebuttals before gaining the speaker’s gavel.

She’s since gone on to become the country’s ambassador to the United Nations.

Sure, Sen. Marco Rubio rose in prominence after he delivered the Republicans’ counter-argument in 2013, but he still gets picked on over how he awkwardly sipped water mid-address.

And Gov. Bobby Jindal, a Louisiana Republican, is barely on the political radar these days, after flubbing his 2009 response to President Obama’s first joint address before Congress.

Jindal’s lasting impression on pop culture-savvy Americans was his strong resemblance to the 30 Rock character Kenneth the Page.

‘I bet Marco Rubio wished he could salivate as well as Joe Kennedy,’ one Twitter user said, including side-by-side comparisons of Rubio sucking at a water bottle and Kennedy’s gooey lips, in a tweet.

A clear Trump supporter suggested Kennedy’s motto should be ‘Make America Drool Again,’ adding that it was a ‘trainwreck response.’

Yet another individual tweeted the contents of Kennedy’s State of the Union ‘preparation starter kit,’ which included the triple threat of Carmex, ChapStick and Vaseline.

Kennedy had to pre-write a response, before actually hearing President Trump’s State of the Union, which is why he couldn’t directly attack certain lines. 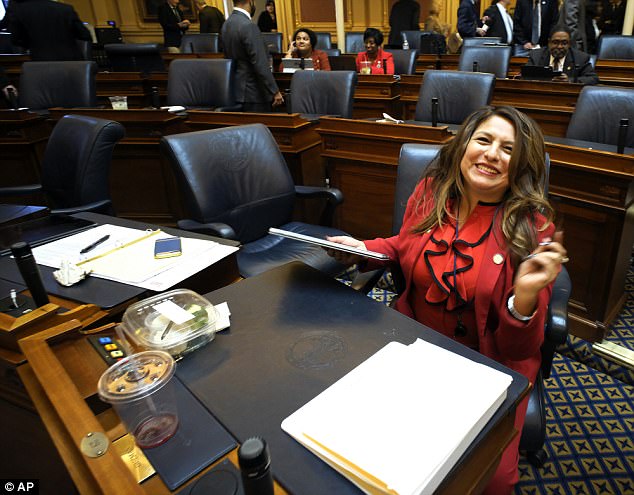 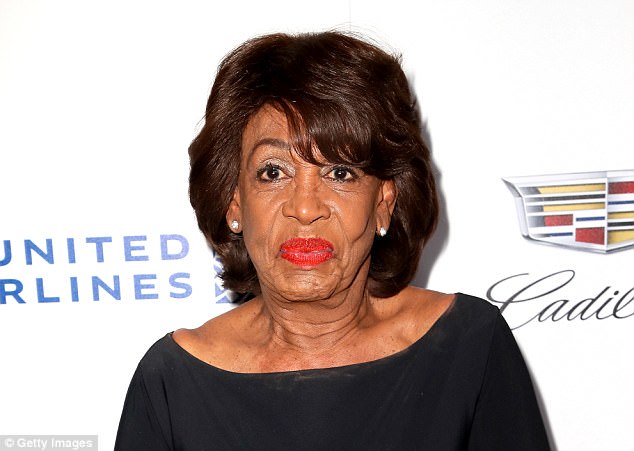 Rep. Maxine Waters will appear Wednesday night on BET, a full 24 hours after President Trump’s speech, to give yet another Democratic counterpoint 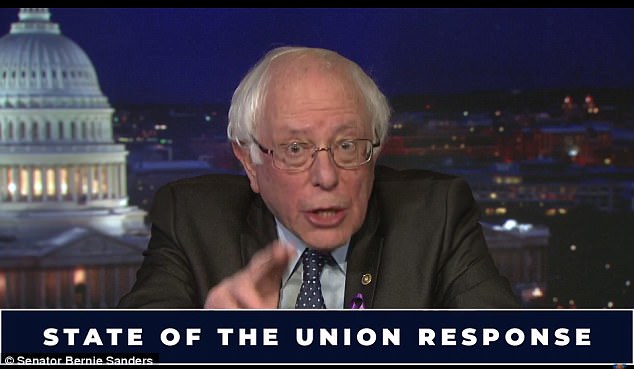 Sen. Bernie Sanders, in a livestreamed response, knocked President Trump for not bringing up items like the Russia investigation and climate change, while relishing in the fact that Trump has been a deeply unpopular president 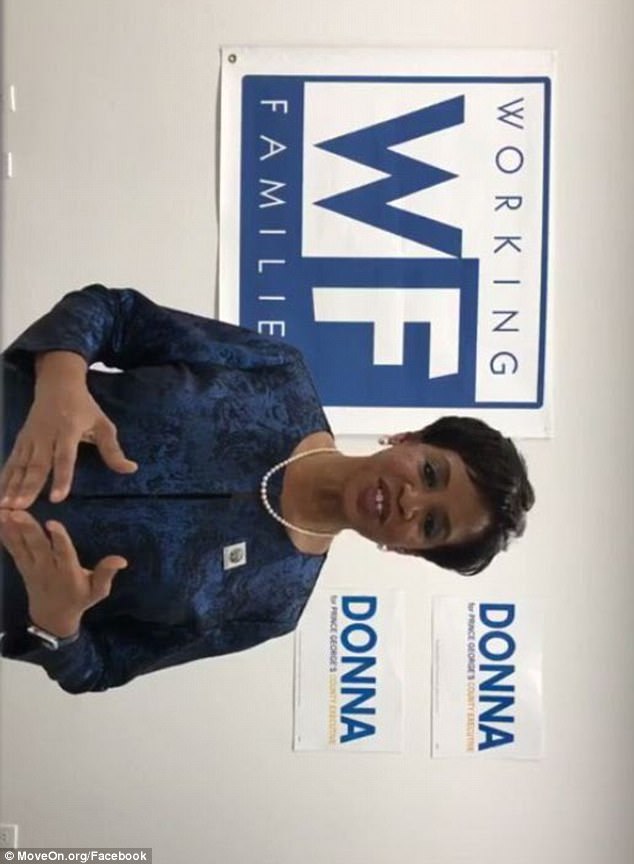 For the first three minutes of former Democratic Rep. Donna Edwards’ State of the Union response, the livestream broadcast her sideways

Four other Democrats gave or will be giving responses.

The Democrats officially sanctioned Virginia Del. Elizabeth Guzman to give the Spanish version of the party’s rebuttal speech.

But Sen. Bernie Sanders, taking the opportunity for a second year in a row, barked his own response to the left-wing of the party, reacting to Trump’s speech in real time.

Sanders named a number of things that he was appalled Trump didn’t talk about, which were all things Trump would never have talked about from the dais.

‘Now I don’t understand how a president of the United States can give a State of the Union speech and not mention climate change?’ Sanders asked.

He had that same thought about college affordability, the Citizens United Supreme Court case, funding for Social Security and the Russia probe.

‘How do you not talk about that, unless, perhaps, you have a very special relationship with Mr. Putin?’ the Vermont independent mused.

‘The simple truth is that according to virtually every poll, Donald Trump is the least popular president after one year in office of any president in modern American history and the reason for that is pretty clear,’ Sanders began.

‘The American people do not want a president who is compulsively dishonest, who is a bully, who actively represents the interests of the billionaire class, who is anti-science,’ he continued.

‘And who is trying to divide us up based on the color of our skin, our nation of origin, our religion, our gender or our sexual orientation,’ Sanders concluded.

Rep. Maxine Waters, who has become famous among millennials as of late, is to deliver a response to Trump too, doing it from a perch at BET Wednesday night, a whole 24 hours after the president’s speech.

Waters will join CNN pundit Angela Rye for a State of the Union special.

And finally former Maryland Rep. Donna Edwards, whose bid for the Senate in 2016 was quashed by fellow Democrat Chris Van Hollen, had her own rebuttal.

Edwards, delivering the Working Families Party’s response, was plagued by technical difficulties for the first three minutes of her address, as the image of the ex-lawmaker was livestreamed sideways.

Once righted, Edwards’ critical message of Trump was less distracting, as she called the Republican tax bill ‘a heist’ and implored liberals to ‘stand boldly against Trump and Trumpism.’

‘It’s not enough just to be anti-Trump, but that’s important,’ she added, noting the future candidates needed to be ready to fight against the scourge of income inequality, racism and sexism.

‘Let’s just get this done,’ she encouraged.