Thirty minutes of morning exercise may rival prescription drugs for lowering blood pressure – and keeping it reduced for the rest of the day.

Scientists in Australia found that a short burst of exercise – in this case, walking on a treadmill at moderate intensity – could potentially replace the need for medication.

The British Heart Foundation welcomed the research, which showed particular promise in relation to systolic blood pressure:  the tension in blood vessels when the heart beats.

According to British charity Blood Pressure UK, around one in three adults (16 million people) have high blood pressure. That equates to 31 per cent of men and 28 per cent of women in England.

Fitness first: Scientists in Australia found that a short burst of exercise – in this case, walking on a treadmill at moderate intensity – could potentially replace the need for medication

Experts at the University of Western Australia in Perth examined data for overweight and obese men and women aged 55 to 80 at the start of the study.

The 35 women and 32 men took part in three different daily plans, in random order, with at least six days between each one.

The first plan consisted of uninterrupted sitting for eight hours, while the second consisted of one hour of sitting before 30 minutes of walking on a treadmill at moderate intensity, followed by 6.5 hours of sitting down.

The final plan was one hour of sitting before 30 minutes of treadmill walking, followed by 6.5 hours of sitting which was interrupted every 30 minutes with three minutes of walking at a light intensity.

The study was conducted in a laboratory to standardise the results, and men and women ate the same meals the evening before the study and during the day.

The results, published in the journal Hypertension from the American Heart Association, found that blood pressure, especially systolic blood pressure, was lower in men and women who took part in the exercise plans, compared with when they did not exercise. 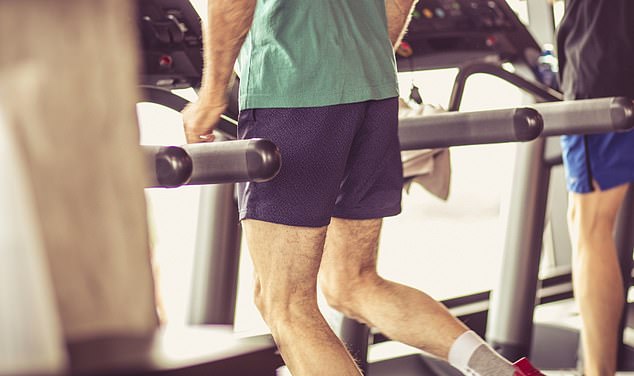 Rigour: The study was conducted in a laboratory to standardise the results, and men and women ate the same meals the evening before the study and during the day

Women in particular enjoyed extra benefits if they added in the short three-minute walks throughout the day.

Michael Wheeler, lead author of the study from the University of Western Australia in Perth, said: ‘For both men and women, the magnitude of reduction in average systolic blood pressure following exercise and breaks in sitting approached what might be expected from anti-hypertensive medication in this population to reduce the risk of death from heart disease and stroke.

‘However, this reduction was greater for women.’

Blood pressure is recorded with 2 numbers. The systolic pressure (higher number) is the force at which your heart pumps blood around your body.

– high blood pressure is considered to be 140/90mmHg or higher

– low blood pressure is considered to be 90/60mmHg or lower

The researchers said they do not know why there was a gender difference, but think it may be due to a combination of factors.

These include varying adrenaline responses to exercise and the fact that all women in the study were post-menopausal and therefore at higher risk of cardiovascular disease.

He said: ‘As the proportion of those who are overweight with higher blood pressure increases with age, adopting a strategy of combining exercise with breaks in sitting may be important to control and prevent the development of high blood pressure.’

Chris Allen, senior cardiac nurse at the British Heart Foundation, said: ‘This study supports a huge body of evidence that shows regular physical activity can help towards lowering your blood pressure and help reduce your risk of heart attacks and strokes.

‘It can also give both your body and mind a boost, which is why 30 minutes of activity in the morning is a great way to set yourself up for the day.

‘At the BHF, we recommend that those trying to lower their blood pressure should exercise regularly, eat a healthy, Mediterranean-based diet and go for regular health checks.

‘If you’re new to being more active, you can always check in with your GP and seek their advice.’

Around one in four adults in the UK has high blood pressure.