Lauren Sanchez’s former friend: ‘Jeff Bezos would be stupid to marry her after four engagements’

A former friend of Jeff Bezos’ new girlfriend Lauren Sanchez has claimed the Amazon CEO would be ‘stupid’ to get hitched to the woman after being there for her four engagements and an alleged scandal where she tried to get back with her ex while engaged to another man.

The ex-pal alleged Sanchez – who is still married to talent agent Patrick Whitesell – attempted to reunite with former NFL player Tony Gonzalez with whom she has a 17-year-old son.

Lauren Sanchez (center) tried to rekindle with her ex before she married her estranged husband Patrick Whitesell (left) according to a former friend. A friend said Amazon CEO Jeff Bezos (right in 2016) ‘is seriously stupid if he’s thinking of marrying her’ 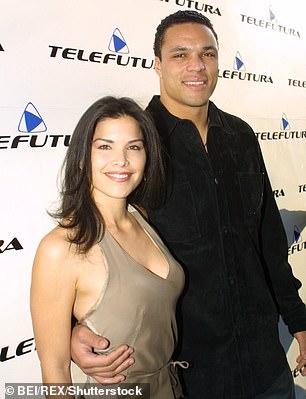 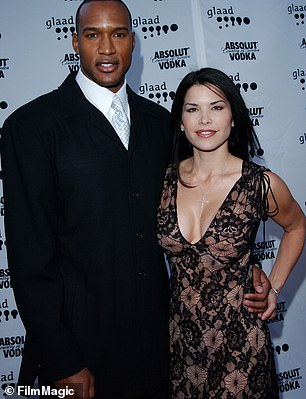 The pal said Sanchez tried to get back with Tony Gonzalez, the father of her 17-year-old son (left in January 2002). She surprised her friend by getting with Whitesell shortly after she moved in with NYPD Blue star Henry Simmons (right in 2003)

The source was referring to the 55-year-old’s split from wife MacKenzie, 48, announced after 25 years of marriage.

The announcement appeared to have been forced by the National Enquirer, which had been documenting his affair with Sanchez for months and collected a number of photos and sexy texts between them.

Sanchez, 49, only started seeing her current spouse shortly after moving into a Manhattan Beach, California pad with NYPD Blue star fiance Henry Simmons. She said ‘I do’ to Whitesell in 2005.

She dated former LA Lakers star Derek Fisher on-and-off for a while after her engagement to Super Bowl winner Anthony Miller was called off back in 2002. 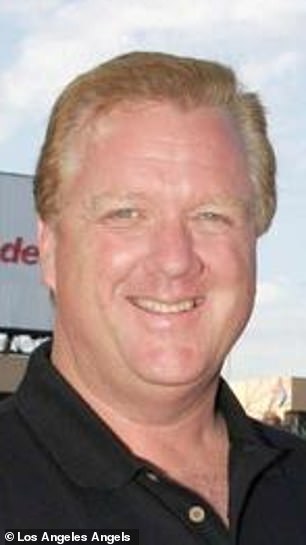 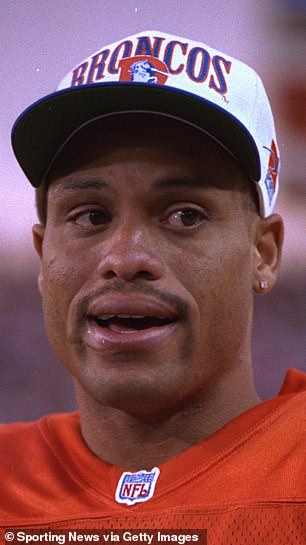 Sanchez was engaged to Rory Markas (left) who died from a heart attack in 2010. Anthony Miller (pictured in 1995) was with her for four years and engaged for one-and-a-half before Miller says he broke things off because she cheated 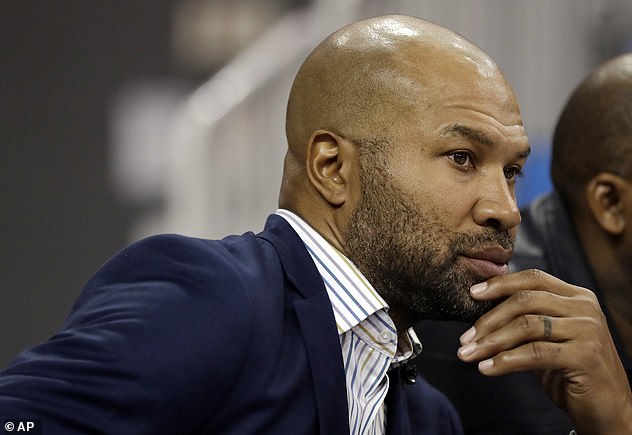 ‘Lauren was with Derek Fisher for a while [after] things went south with Anthony Miller,’ a source previously claimed.

Miller claimed that despite a five-year relationship with Sanchez, he felt he could ‘never really trust her’.

The former NFL star, 53, met Sanchez at the 1996 Super Bowl when he was playing for the Denver Broncos and she was a rising star TV reporter.

The pair were together for four years and engaged for one and a half before Miller says he broke things off. 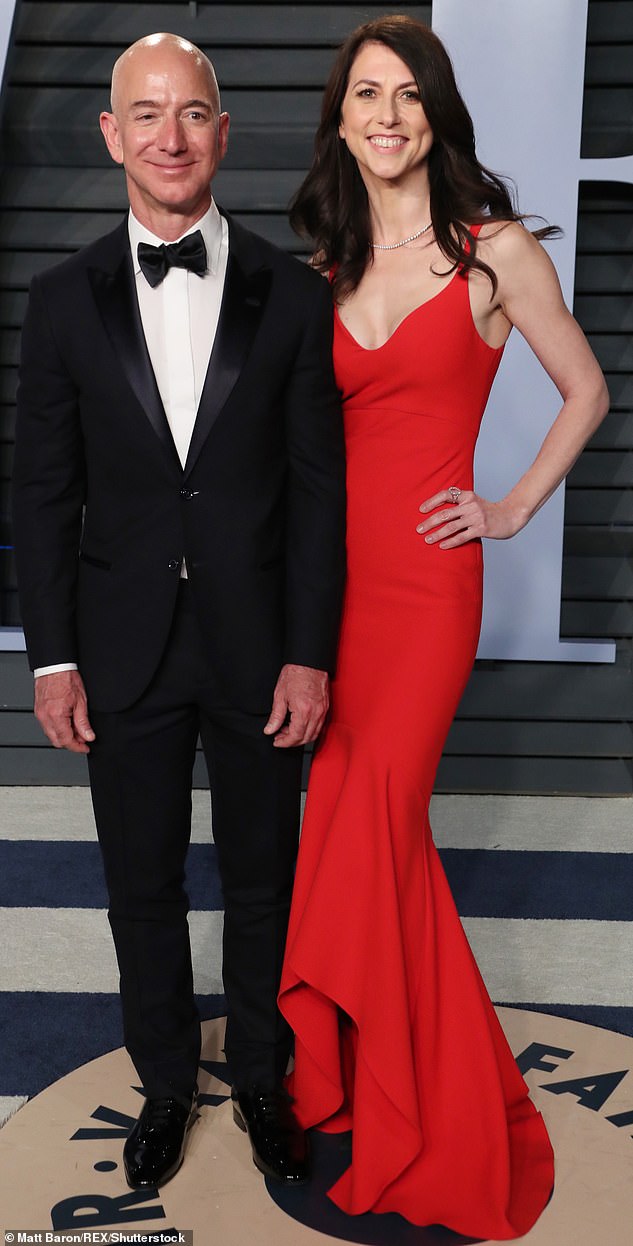 A former friend of Sanchez said: ‘He’s already seriously stupid for giving up half his fortune for her.’ Bezos is pictured with his estranged wife MacKenzie in March 2018

‘I couldn’t really trust her,’ Miller told the Mail on Sunday. ‘She gets around. She was cheating on me with other guys.

‘I found out when I looked in her diary, and I found out more after I broke up with her.’

However, sources close to the couple have disputed Miller’s claims, saying that it was him who cheated on Sanchez with a stripper.

Those sources also called the athlete an ‘opportunist’ for speaking out about the relationship two decades later, right after her alleged eight-month affair with world’s richest man was revealed. 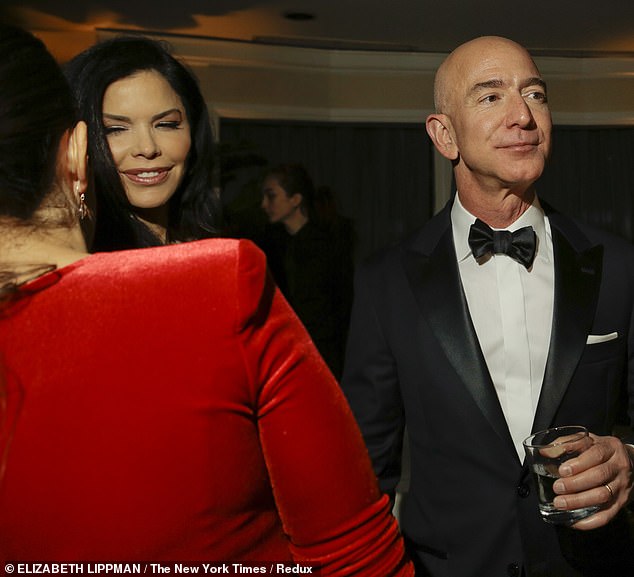 Sanchez (far left) was spotted alongside Bezos at Amazon’s Golden Globes party on January 6. Sanchez allegedly told a friend: ‘Now that’s the kind of guy I need’ after meeting Bezos

The former friend who spoke to Page Six added on Wednesday that Sanchez got engaged to the late sports broadcaster Rory Markas when she was an intern at a TV station in Los Angeles.

The source said she left Markas – who died of a heart attack in 2010 – when she got a new job.

‘Then she traded up to NYPD Blue star Henry Simmons, and they were engaged. Then she was getting married to Patrick Whitesell,’ a source previously said.

A longtime friend of Sanchez on Monday told DailyMail.com of how the married TV anchor set her sights on Jeff Bezos after she and her talent agent husband Whitesell became friends with the billionaire several years ago in Seattle.

After meeting Bezos and MacKenzie socially several years ago, Sanchez told a friend: ‘Now that’s the kind of guy I need,’ the close friend claimed.