Tory minister Amber Rudd was forced to make a grovelling apology to Diane Abbott today after sparking a racism row by calling the shadow home secretary a ‘coloured woman’.

The Work and Pensions Secretary, 55, made the gaffe about the Labour frontbencher while on a radio show to discuss abuse faced by female MPs, ahead of International Women’s Day.

She told Jeremy Vine on BBC Radio 2: ‘It definitely is worse if you are a woman and it is worst of all if you are a coloured woman.

‘I know that Diane Abbott gets a huge amount of abuse and I think that is something we need to continue to call out.’

Ms Abbott, 65, responded on Twitter, saying: ‘The term ‘coloured’, is an outdated, offensive and revealing choice of words.’

Ms Rudd apologised as the clip went viral on social media, saying: ‘Mortified at my clumsy language and sorry to @HackneyAbbott.

‘My point stands: that no one should suffer abuse because of their race or gender.’ 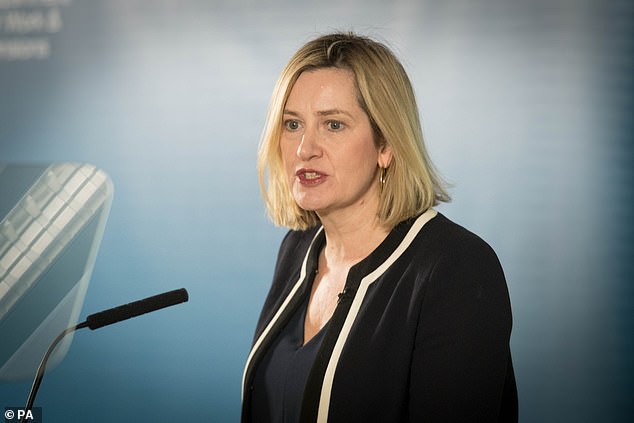 The term ‘coloured’ is widely associated with segregation-era racism in the United States, especially the Deep South.

It was the third major mistake by a senior Tory Cabinet minister in as many days.

On Tuesday Transport Secretary Chris Grayling was derided by MPs over his handling of a multi-million pound contract for no-deal Brexit ferries.

He compounded a £33million payout to settle a court case by Eurotunnel by failing to appear before MPs to account for it.

And yesterday Northern Ireland Secretary Karen Bradley suggested that deaths caused by soldiers and police during the Troubles were not crimes. She apologised today for the remarks she had made in the House of Commons. 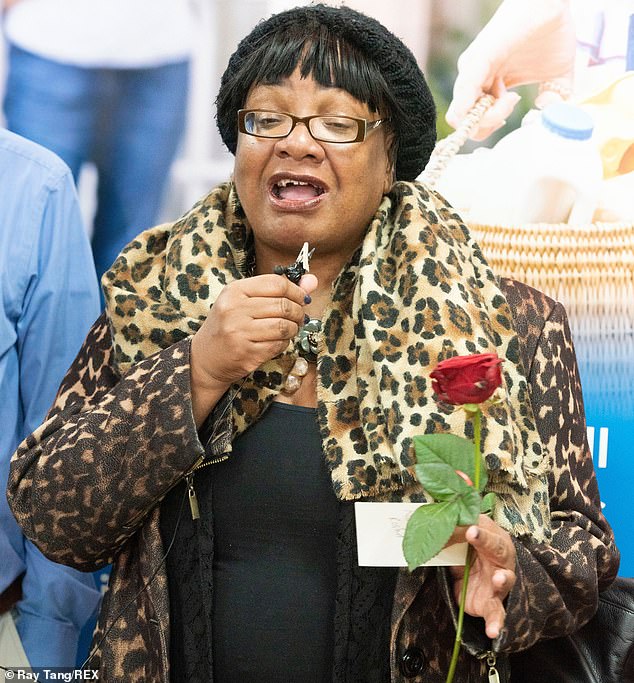 Ms Abbott, 65, (pictured on Sunday) responded on Twitter, saying: ‘The term ‘coloured’, is an outdated, offensive and revealing choice of words.’ 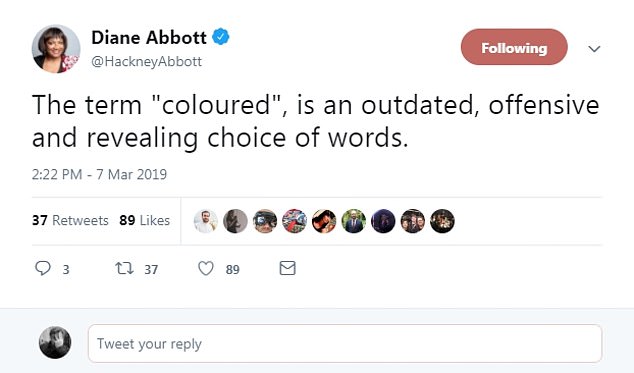 Ms Abbott was quick to pick up on Ms Rudd’s choice of words on the radio, taking to Twitter to call it out 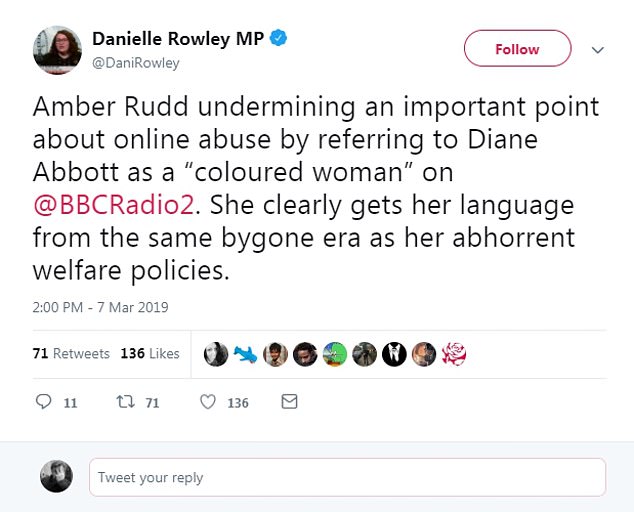 And fellow Labour MPs were quick to attack the Tory’s slip, suggesting she used outdated language that belonged int he past

Ms Abbott, a close friend and advisor to Labour leader Jeremy Corbyn, has long been the main political target of vicious online trolls who have bombarded her with mainly racist and sexist abuse on social media.

It was this point that Ms Rudd was trying to make when she made her appalling mistake.

The term ‘coloured’ is widely associated with segregation-era racism in the United States, especially the Deep South.

‘She clearly gets her language from the same bygone era as her abhorrent welfare policies.’

Downing Street said that Theresa May continued to have confidence in Ms Rudd.

A spokeswoman said: ‘She apologised very swiftly. She has described it herself as clumsy language. That was absolutely the right thing to do.’

It is the latest racism row to srike the Conservative Party. In 2017 Anne Marie Morris, the MP for Newton Abbot in Devon, apologised for using the phrase a ‘real n***** in the woodpile’ at a meeting about Brexit. She was suspended from the Tory party but later had the whip restored.

Ms Rudd was forced to quit as Home Secretary over the Windrush scandal in April 2018.

Northern Ireland Secretary Karen Bradley said she is ‘profoundly sorry’ today for the ‘offence and hurt’ caused after she suggested deaths caused by soldiers and police during the Troubles were not crimes.

Ms Bradley faced calls to resign following the comments on Wednesday, which sparked criticism from victims of the security forces and nationalist political leaders.

Her intervention also sparked a diplomatic spat with Dublin as the Irish Government demanded an explanation.

Even former soldiers opposed to prosecuting troops who served in Northern Ireland slammed the minister. Ex-head of the Army Lord Dannatt branded the remarks ‘extraordinarily embarrassing and naive’.

In her apology, Ms Bradley said her language was ‘wrong’ and ‘deeply insensitive’ to many of those who lost loved ones – particularly on Bloody Sunday in 1972, where soldiers of the Parachute Regiment killed 13 civilians.

David Cameron issued an historic apology over the actions of British troops on Bloody Sunday in 2010, admitting the killings were ‘unjustified and unjustifiable’.

The Northern Ireland Secretary was humiliated last year after she admitted in an interview to not understanding the province’s politics split on sectarian lines when she took on the job.

The Mail has long campaigned against a witch-hunt of British troops. Their treatment stands in stark contrast to members of the IRA who, under the Good Friday Agreement of 1999, face a maximum of two years in prison for atrocities during the Troubles.

Last year she was accused of being out of touch after claiming that EU citizens applying to stay in the UK after Brexit would have access to a system ‘as easy to use as setting up an online account at LK Bennett’, a label beloved of Kate Middleton where shoes and dresses cost hundreds of pounds.

Her BBC interview came after she joined other Conservatives women MPs this morning in using a ‘mean tweets’ video to call out the sexist abuse they receive on social media in a revealing video.

The Work and Pensions Secretary revealed she had been blasted as ‘less attractive than Medusa’s fugly sister’ in a clip released ahead of International Women’s Day.

Other revelations include Immigration Minister Caroline Noakes revealing she was called a ‘self-centered, arrogant bitch’, in a video designed to highlight the contribution women have made in Parliament

And Scottish Tory Kirstene Hair was branded a ‘silly wee lassie’ who ‘fits into the blonde stereotype’.

The concept of famous people reading out ‘mean tweets’ they receive originated in the US on Jimmy Kimmel’s chat show.

Ms Rudd used the video to defend her action on Universal Credit since taking up her job in November, saying: ‘Well, Medusa’s fugly sister, in the past few months, has ensured that we have reset Universal Credit, got more money coming into our welfare system and made sure that it really works for women.

In a poignant message, Ms Rudd she went on to add: ‘We need to improve gender balance in parliament. We need to get more women coming in.

‘But unfortunately many women are put off by the abuse they get in social media.

‘We need to call it out, we need to stop it so we can encourage more women to have the courage, come forward and get involved in politics.’ 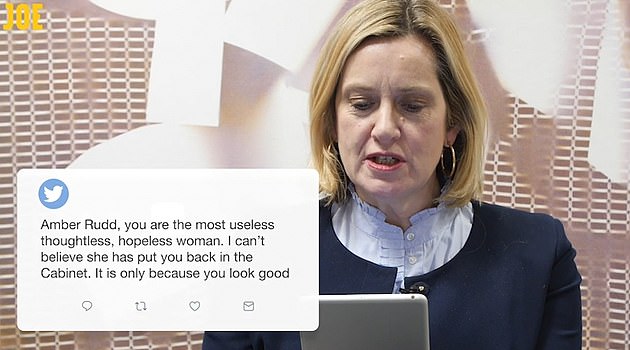 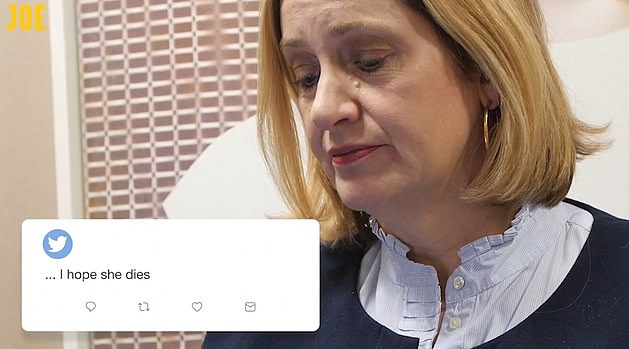 The minister, tipped as a runner to replace Theresa Mmay when she quits as Prime Minister, was also on the receiving end of thoughtless abuse included wishes that she die 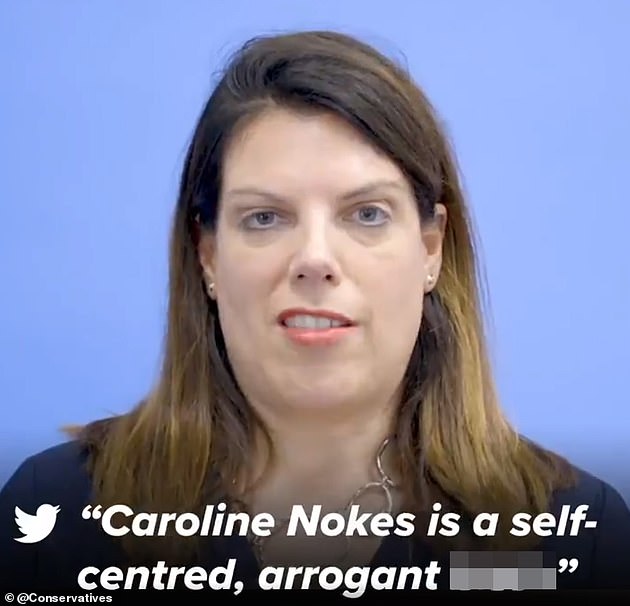 Immigration Minister Caroline Noakes revealed that a Twitter user called her a b*tch but she later highlighted the work she had done.

In a separate video for the website Joe Ms Rudd read out a further selection of the ‘nasty’ tweets she is sent on a daily basis.

They include ones calling her a ‘b*stard’ and a ‘totally heartless sh*tsack’, and one which ends ‘I hope she dies’.

After reading one which said she was ‘the most useless, thoughtless, hopeless woman’ who was only back in the Cabinet ‘because you look good’, she joked: ‘I like that one – absolutely accurate, obviously.’