A 40-year-old mother who was told by doctors not to have any more children after having seven miscarriages and 11 rounds of IVF was stunned to discover she had fallen pregnant naturally.

Verity Degg, from Tamworth, Staffordshire, thought she was going through the menopause after struggling for years to conceive a sibling for Jack, eight – her only son with husband Jack, 43.

But after feeling unwell for a few weeks, Verity – who had given up hope that they would have another child – found out she was carrying her ‘miracle’ baby Olly.

Verity Degg, from Tamworth, Staffordshire, thought she was going through the menopause after struggling for years to conceive a sibling for Jack, eight – her only son with husband Jack 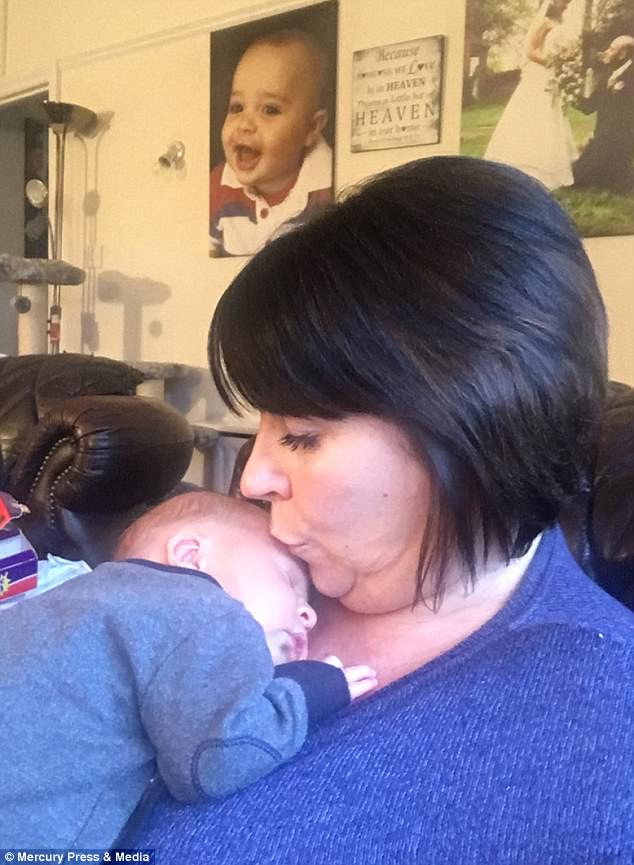 The nine-month-old boy was born weighing a healthy 7lb 2oz – despite Verity being told her body wouldn’t be able to cope with another pregnancy.

Verity said: ‘After the miscarriages and what I went through with Aimee [who was stillborn at 32 weeks] doctors said I’d been through too much and shouldn’t try for another.

‘We were due to go on holiday to America but I started to feel really unwell. For about two weeks I was feeling really sick.

‘I was 39 and was convinced it was down to the menopause, I’d known friends who had been through it at 36.

‘My mum said “have you thought about doing a test?” and 15 [positive] tests later I was pregnant,’ she revealed. 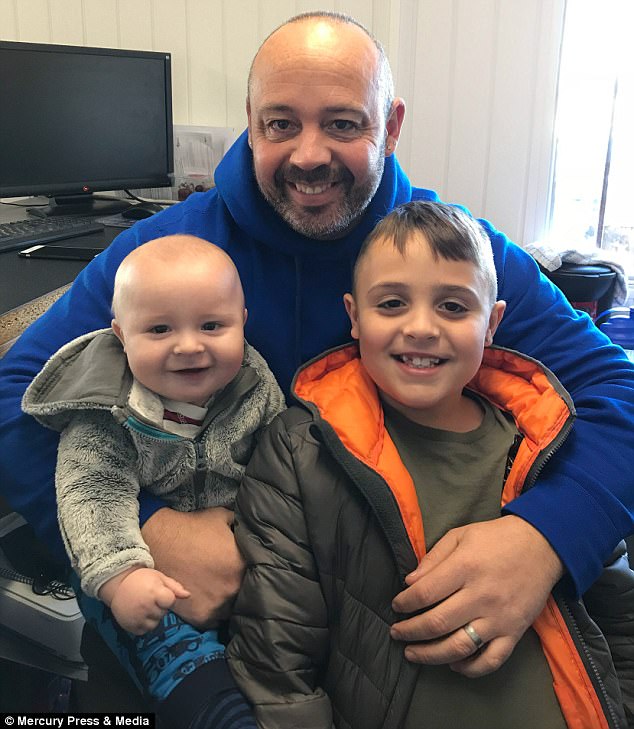 After seven miscarriages Verity and her husband Jason, 43, (pictured with Jack, eight, and baby Olly) had given up hope that they would have another child, after their daughter Aimee was stillborn at 32 weeks

Despite her delight, Verity was understandably hesitant about getting too excited.

‘I was scared to be happy because I kept thinking “I can’t go through this again. I can’t lose another baby”,’ she admitted.

‘We went to America and I kept taking pregnancy tests to check it was still there.

‘Then the Zika virus broke out and I was convinced we were going to lose him.

‘I was trying to be positive but I couldn’t help being negative – everybody was telling me to stay calm.

‘It was so hard to be happy. I was too scared to be happy in case it all got taken away from me.’

And Verity’s hesitation was understandable, after she suffered a number of miscarriages, including one on Mother’s Day, before she went through the trauma of giving birth to Aimee at 32 weeks.

A post-mortem discovered Aimee had Edwards’ Syndrome – a rare and severe disorder which can limit the life of a baby to just a few days.

Verity said: ‘Four years ago we got past the four-month mark with Aimee. 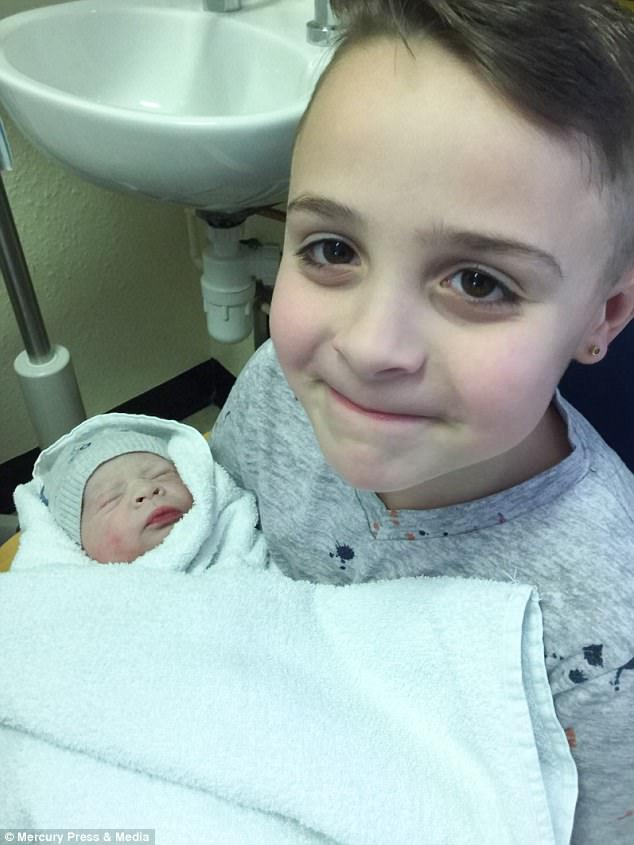 ‘They are both miracle babies, I don’t know how I have got either of them,’ the mum admitted of Jack and Olly (pictured together when Olly was born)

‘Throughout the pregnancy I didn’t feel her move much and they found out I had too much fluid, which had happened with Jack. We were having constant check-ups.

‘I got to 32 weeks and I knew something was wrong.

‘Someone had mentioned they could see the outline of the baby in my stomach and I knew that wasn’t right.

‘My husband was away so I took myself to the hospital on the Saturday and told them “I think she is dead”.

‘The midwives were trying to get a heartbeat and I was saying “she’s gone”.

‘It was awful. They told me I had to take tablets to end the pregnancy and I kept thinking “but what if she is still alive?” I thought if I took the tablets I will kill her, but she was already gone.

‘I had to go back on the Monday to be induced, I just shut myself in my room all weekend.’

And her trauma was made worse by the fact that her son Jack was waiting to meet his sibling back at home. 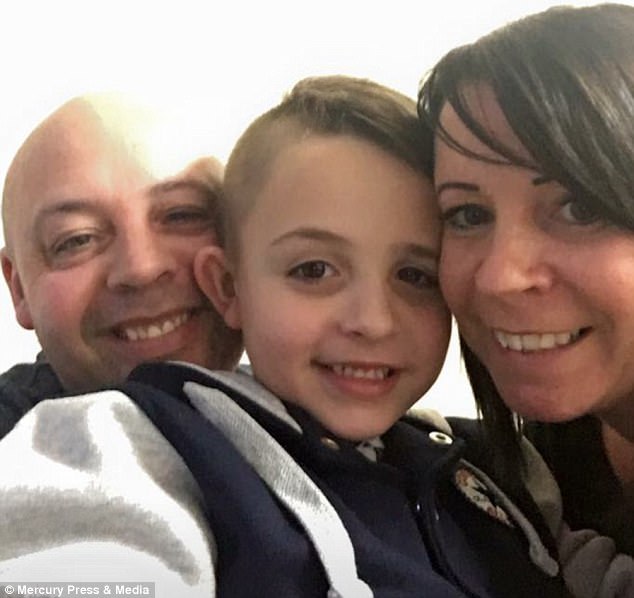 Jack couldn’t wait to meet his little brother, and thankfully the birth went smoothly and Verity introduced her two boys to each other immediately

‘I had a little boy at home who knew he was having a sister. How could I tell him? How could I carry this baby round for the whole weekend?’ she remembered.

‘I went in on Monday to give birth and it was horrific. I was induced at 9am and she was born at 10.10pm.

‘It was the worst, I would never want anybody to go through that. You expect to hear a cry and there was just silence.

‘Her little fists were clenched and she had a cleft palate but she was perfect, it was so surreal.

‘I was holding her – she was there but wasn’t there,’ she said, adding: ‘We had to tell our little boy that his sister was not coming home. He was four at the time.’

‘I blamed myself because I was carrying her and my husband was saying he felt like he should have known.

‘My husband carried her coffin – I don’t know how he did that.’

The couple paid hundreds of pounds for a Harmony test when she was pregnant with Olly which can identify if a baby is at risk of suffering Down Syndrome or Edwards’ Syndrome – and it came back negative. 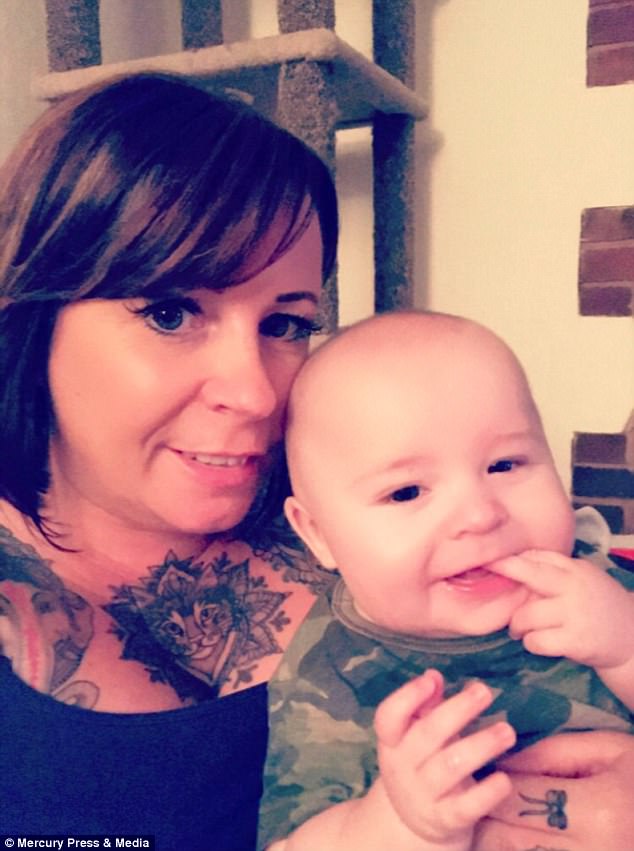 ‘He was born by C-section and he’s a great bouncy bonny baby who looks a lot like Jack,’ Verity said of giving birth to Olly, pictured

Verity said: ‘With Olly part of me started thinking it was going to be okay but I was a midwife’s nightmare, I would worry about every little twinge.

‘They were scanning me every 12 weeks and everything seemed to be going really well.

And Verity suffered further trauma when she was forced to undergo an emergency operation.

‘I got bitten by a feral cat we had taken in, she bit me right through my finger.

‘I thought nothing of it but then I started to think about when my last tetanus jab was.

‘I went to the hospital and by the time I arrived I couldn’t move my hand.’

Verity was told she might lose her finger and ended up having three operations before catching bronchitis.

The former police staffer said: ‘I kept thinking everything is going wrong. I’m going to lose my baby.

‘The George Elliot Hospital in Nuneaton has a room where parents can go if their child is stillborn and I asked if I could go and have a look round.

‘Jason was asking why I wanted to do that and I said ‘just in case’. I was trying to be positive but the fear was still there. 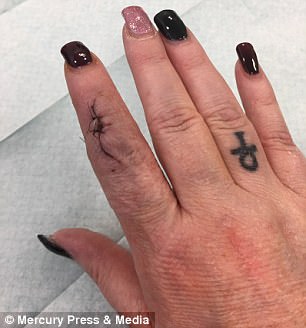 ‘We had to show Jack the scans to prove that Olly was still alive and we had to speak to the hospital and say my little boy is convinced he is going to be born dead.

‘He would tell people in the street ‘my brother is going to be born asleep.’

But thankfully the birth went smoothly and Verity introduced her two boys to each other immediately.

‘As soon as Olly was born Jack was brought into the room and he saw him first before me to prove he was alive.

‘He was born by c-section and he’s a great bouncy bonny baby who looks a lot like Jack.

‘They are both miracle babies, I don’t know how I have got either of them,’ the happy mum admitted.

‘It’s quite amazing. I find myself staring at them and thinking ‘are you really mine?’ I can’t believe they are here and that we made them.’

Verity said the couple had always dreamed of a big family and tried for seven years before they had Jack via IVF.

Verity said: ‘I have always wanted to be a mum and to feel like it was never going to happen it broke me. I was heartbroken.

‘I think I knew that there would be problems because my mum and nan had IVF it but it was horrible. We spent £25,000 on it.

‘My whole focus was on getting pregnant, I dismissed everything else.

‘The tests were always negative. I would have to go the hospital to do them and by the time I would get there I would have started my period or I would go and be convinced it was positive and take the test and it hadn’t worked.

‘I thought there was something wrong with me. You think ‘why can’t I have a baby? What have I done wrong that I can’t have my own child?’ You think everybody is against you. 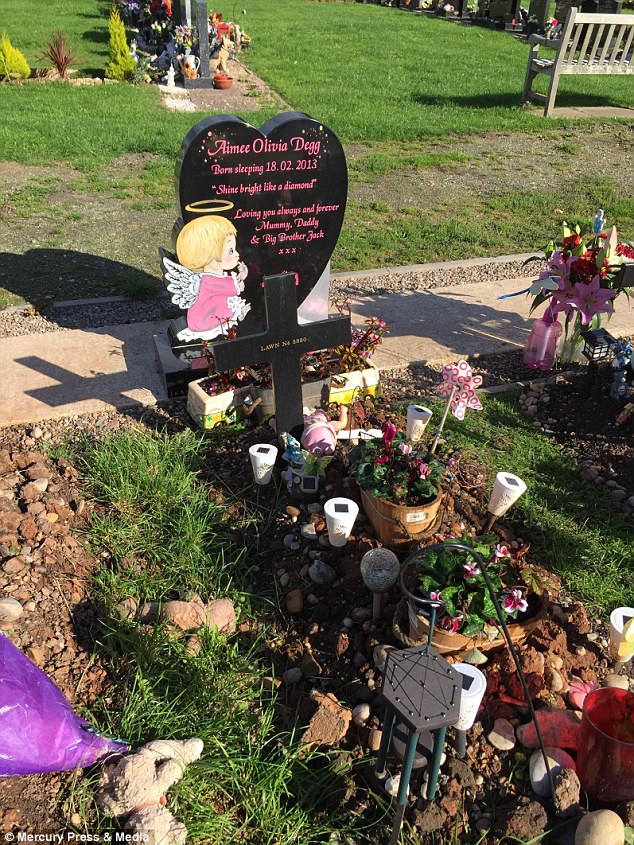 Verity suffered a number of miscarriages, including one on Mother’s Day, before she went through the trauma of giving birth to Aimee at 32 weeks

‘All of my friends were getting married and having kids – but it wasn’t happening for us.’

The couple vowed the 11th round would be their last and were thrilled to discover it had finally worked.

Verity said: ‘I did 15 pregnancy tests just to keep getting that blue line.

‘I was completely over the moon but always nervous thinking am I going to lose it? It’s such an emotional rollercoaster because it is something that we wanted so much.’

After 16 hours of labour first-born Jack was born by caesarean after his heart stopped beating.

Verity said: ‘I didn’t know if he was alive, it was so traumatic. I remember asking on the way down “is he dead?” and the doctors said they didn’t know.

‘He took a while to cry but when he did it was amazing, I just burst into tears.

‘It was amazing having him in my arms and thinking ‘we’ve done it, we’re responsible for this little one’.’ 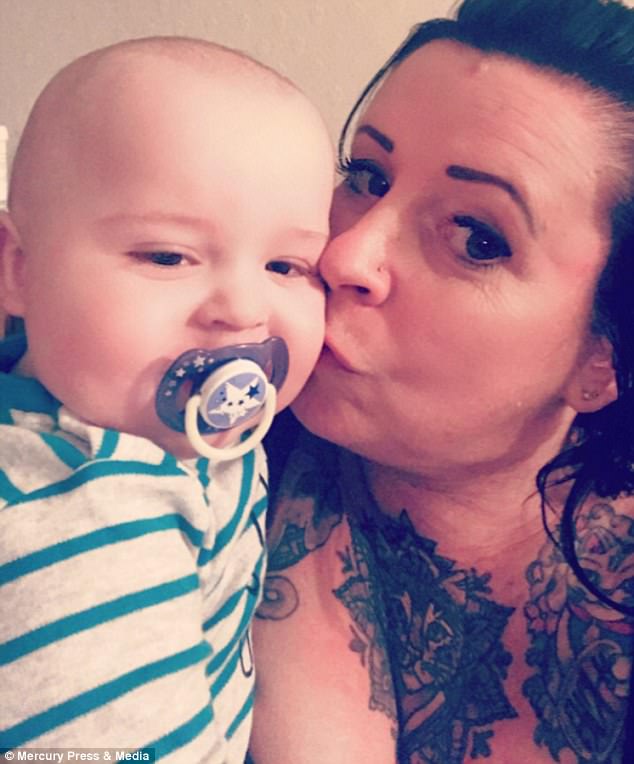 ‘It’s quite amazing. I find myself staring at them and thinking ‘are you really mine?’ she said of Olly, pictured

However their joy was short-lived as Jack was rushed into intensive care a couple of weeks later after he kept holding his breath and turning blue.

The family were even told to come in to say goodbye to the tot as it didn’t look like he would pull through.

It turned out Jack had an allergy to milk and for the first five years he had to be fed by an alternative only available on prescription.

With Olly, the couple said their family is now complete.

Verity said: ‘When I had Aimee I spoke to other people going through the same thing and realised it was not just us.

‘I spoke to another woman who went on to have kids and that gave me hope.

‘They would send me messages saying ‘don’t give up’. They become your support network because they have been through it.

‘We’ve got a lovely family now. It feels like it’s complete and I think throughout it all we have also helped other children.’ 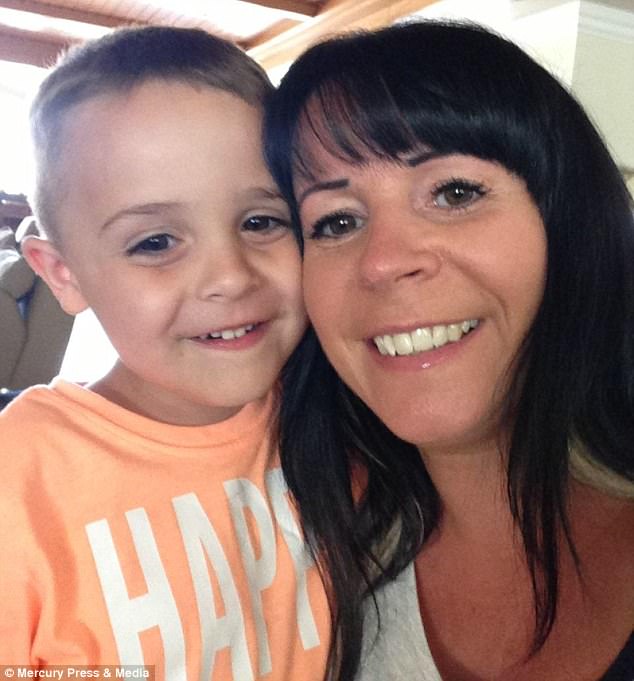 Verity said the couple had always dreamed of a big family and tried for seven years before they had Jack (pictured) via IVF – their family, along with two adopted children aged six and eight, is now complete