The London-listed firm saw net fee income jump by 26 per cent to £112million in the three months ending 30 June, compared to the same period last year, thanks to growth across all forms of recruitment.

Having already achieved a healthy opening quarter performance, the business now expects full-year profits to be ‘slightly ahead’ of current market forecasts.

Widespread labour shortages, combined with a high level of voluntary resignations and surging salaries, have led to a massive scramble to hire new talent and provided a financial boon for the recruitment sector.

Trade has received a further boost from the shift to hybrid working, with Robert Walters observing earlier this year that companies were becoming more ‘location-agnostic’ and reliant on virtual platforms when deciding who to hire.

It noted that demand for full-time positions was especially strong in the UK, where a rebound in financial services hiring and thriving activity across both London and the provincial areas helped its gross profits rise by 13 per cent to £20.4million.

At the same time, growth in the Asia-Pacific region, its most profitable territory, was buoyed by double-digit percentage expansion in fees in all but two countries where it has operations.

On a constant currency basis, Robert Walters saw fee income double in Taiwan, while it rose by just over half in Indonesia and by 20 per cent and 11 per cent, respectively, in its two biggest Asian markets of Japan and Australia.

This more than offset a decline in trade in Mainland China, where severe Covid-related lockdown restrictions in major metropolises like Shanghai and Beijing this year led some multinationals to scale back their presence. 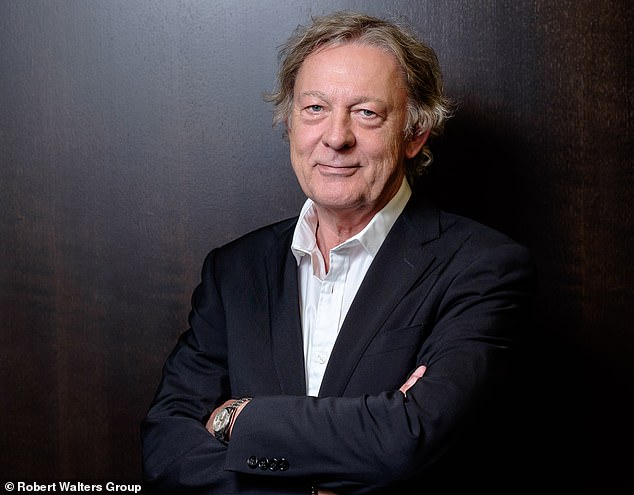 Boss: ‘We have continued to invest in additional headcount to ensure we are able to further capitalise on the current demand for talent that exists,’ said CEO Robert Walters

Chief executive and company founder Robert Walters said he was ‘delighted’ to report a record performance, not just in the last quarter but in the first half of the year as well, which saw net fee income up 27 per cent.

The massive demand among industries to hire new staff has also enabled Robert Walters to lift its own employee headcount by another 7 per cent since the end of March, although it remains moderately below its pre-pandemic peak.

‘We have continued to invest in additional headcount to ensure we are able to further capitalise on the current demand for talent that exists across our global footprint and specialist disciplines,’ Mr Walters remarked.

He added: ‘This continued strong performance means that profit for the full year is now expected to be slightly ahead of current market expectations.’

Yet Neil Shah, Edison Group’s director of research, warned: ‘Looking ahead, it appears that the group’s greatest obstacle could be signs of a potential slowdown in the recruitment market as fears of a recession continue to loom over employers.

‘In the US, for example, the pace of job postings on major recruitment websites has slowed in recent weeks. However, the group’s strong balance sheet combined with its growing international footprint could provide it with a source of sustainable growth going forward.’

Robert Walters shares were up 1.4 per cent to £5.16 during the late afternoon on Wednesday, although their total value has fallen by 38 per cent over the past six months.