Supreme Court Justice Ruth Bader Ginsburg revealed Friday that her cancer has returned and she is undergoing chemotherapy.

The 87-year-old released a statement detailing her illness after spending three days in the hospital this week, which she said was not related. 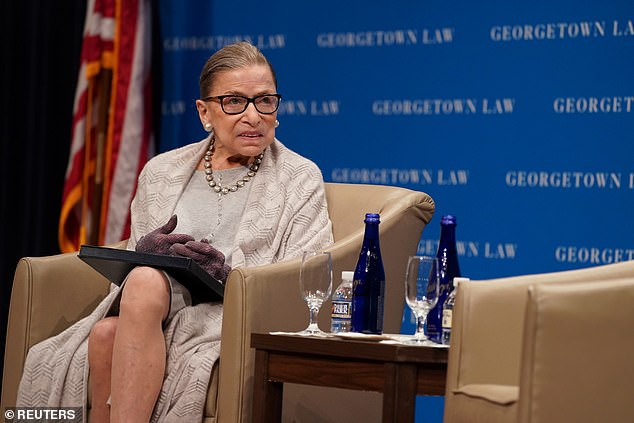 In her statement, Ginsburg said: ‘On May 19, I began a course of chemotherapy (gemcitabine) to treat a recurrence of cancer.

‘A periodic scan in February followed by a biopsy revealed lesions on my liver. My recent hospitalizations to remove gall stones and treat an infection were unrelated to this recurrence.

‘Immunotherapy first essayed proved unsuccessful. The chemotherapy course, however, is yielding positive results. Satisfied that my treatment course is now clear, I am providing this information.

‘My most recent scan on July 7 indicated significant reduction of the liver lesions and no new disease.

‘I am tolerating chemotherapy well and am encouraged by the success of my current treatment.

‘I will continue bi-weekly chemotherapy to keep my cancer at bay, and am able to maintain an active daily routine. Throughout, I have kept up with opinion writing and all other Court work.’

In August 2019, the Supreme Court announced that Ginsburg had recently completed three weeks of focused radiation treatment to ablate a tumor found in her pancreas over the summer.

The statement came after the Supreme Court said Wednesday that Ginsburg was discharged from a hospital after being treated for a possible infection.

A court spokeswoman said in an emailed statement that Ginsburg was ‘home and doing well.’

Ginsburg had gone to a hospital in Washington on Monday evening after experiencing fever and chills.

She had a procedure at Johns Hopkins Hospital in Baltimore on Tuesday afternoon to clean out a bile duct stent that was placed last August when she was treated for a cancerous tumor on her pancreas.

The court said in a statement Tuesday that she would ‘stay in the hospital for a few days to receive intravenous antibiotic treatment.’

Ginsburg, a staunchly liberal vote on the court, was first evaluated at Sibley Memorial Hospital in Washington DC on Monday night after experiencing fever and chills.

Although the Supreme Court’s summer recess officially began last week, the justices worked into the wee hours of Tuesday, considering a request by the federal government to allow federal executions to resume after a 17-year hiatus – meaning she took part from her hospital bed.

Following the ruling, the federal government on Tuesday executed Daniel Lewis Lee, who was convicted of murdering an Arkansas family in a 1990s plot to build a whites-only nation in the Pacific Northwest.

The government then executed Wesley Ira Purkey on Wednesday for the killing of a Kansas City teenager in 1998.

Ginsburg’s determination to stay on the court in the face of health challenges comes before a November election in which Trump is already explicitly calling for four more years to move the court further to the right.

But in a move which has infuriated Democrats, McConnell has said he would advance a nomination from the Trump administration on the basis that the presidency is in its first term – meaning that if Ginsburg were to retire, it would be almost certain that her seat would go to a conservative, giving that wing of the court a 6-3 majority.

The Roberts court has offered Trump a series of defeats in recent weeks, with Ginsburg part of the 6-3 majority which extended civil rights protections to LGBTQ people, the 7-2 majority denying his claims of presidential immunity from any criminal investigation and Congressional oversight; and the 5-4 majority which blocked Trump’s termination of DACA.

The 87-year-old has been treated five times for cancer, fractured her ribs several times and was recently admitted to the hospital for an infection.

But despite her health struggles, Ginsburg never let it slow down her work.

Below is a timeline of Ginsburg’s health issues:

Summer of 1999: Ginsburg was diagnosed with colon cancer. The disease was found when she went to the hospital for what doctors thought was acute diverticulitis, which is an irritable bowel syndrome.

Doctors treated the cancer at an early stage and after undergoing surgery, chemo and radiation, the cancer was gone.

February 2009: Ginsburg underwent surgery for early-stage pancreatic cancer. By the end of the month, she was back at work when the Supreme Court resumed session.

May 2013: Ginsburg fell at home and fractured her ribs.

November 2014: Ginsburg had heart surgery to place a stent after she ‘experienced discomfort during routine exercise’.

November 2018: Ginsburg fell at her office and fractured three of her ribs. A CT scan showed she had an ‘abnormality in one lobe of the lung’, NPR reported.

August 2019: Ginsburg announced she was being treated for pancreatic cancer. She was declared cancer-free in January 2020.

May 2020: Ginsburg was treated for acute cholecystitis, a benign gallbladder condition, according to the NYT.

July 2020: Ginsburg was treated for a possible infection.