An earthquake struck the San Francisco Bay area with tremors recorded in a number of locations, officials said.

The 4.3 magnitude earthquake was felt over a wide area of the East Bay and as far away as Sacramento, according to the United States Geological Survey.

An earthquake struck the San Francisco Bay area with tremors recorded in a number of locations. A map shows where the earthquake hit along the Greenville fault, (pictured),

Tremors were felt in Martinez, Pittsburgh and as far west as Berkeley. No damage or injuries have been reported, the San Francisco Chronicle reported.

The quake, which occurred on the Greenville fault,  had a depth of 7.58 miles and was expected to produce light shaking around the epicenter, but damage to structures was not expected.

The area around the Greenville fault has been seismically active with a series of small quakes rattling the area in 2015.

The Alameda County Sheriff’s Office tweeted: ‘Mother Nature just reminded us why we need to be prepared for an #earthquake and be able to sustain ourselves and communities.’

Ole Kaven with the USGS told KPIX5: ‘This area is no stranger to that type of magnitude. There has already been one small aftershock. So we’re keeping an eye in this.

He added: ‘The general rule of thumb for all California faults is that there is about a 1/20 chance that there will be a larger event after.’ 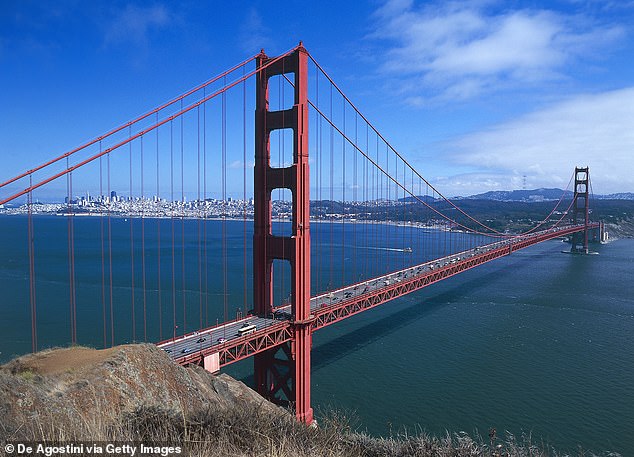 San Francisco residents have been on high alert since a 6.4 magnitude earthquake struck California on Friday, followed by a 7.1 temblor the following day

Melissa Miller, who lives in Pleasant Hill, said she was nervous when she felt shaking at her home. She told KPIX5: ‘It’s been a while since I felt on earthquake.

‘I noticed that the lamps on my table were shaking and my cat was going a little crazy. That roll-jerk kind of thing we feel when we have earthquakes.

In the last ten days, there have been two earthquakes of magnitude 3.0 or greater centered nearby.

An average of 25 earthquakes with magnitudes between 4.0 and 5.0 occur per year in California and Nevada, according to a recent three-year data sample. 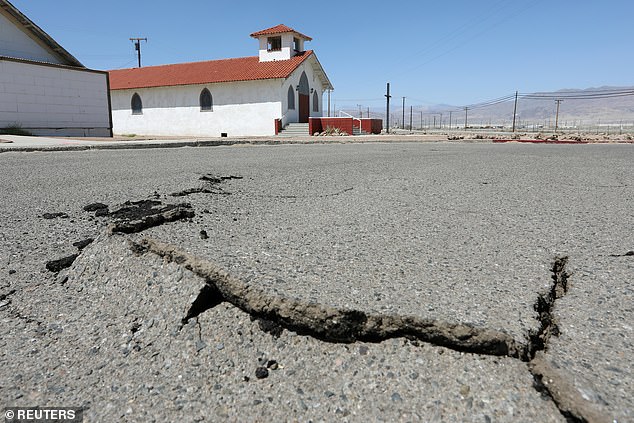 Cracks are seen in the street next to Trona Community Church after a powerful magnitude 7.1 earthquake on July 5, triggered by a 6.4 the previous day, near the epicenter in Trona 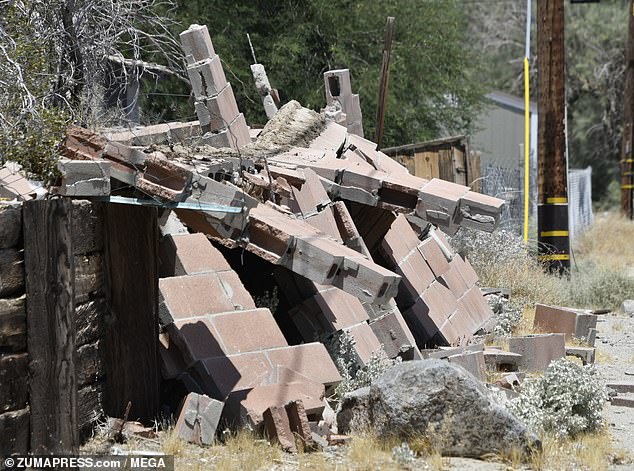 A damaged building is seen in the Ridgecrest area after a 6.4 magnitude earthquake struck on July 4, followed by a 7.1 magnitude aftershock on July 5

Residents have been on high alert since a 7.1 magnitude earthquake sparked huge fires and caused multiple injuries in Southern California on July 5.

The region was struck by a magnitude 6.4 earthquake on July 4, followed by a 7.1 temblor the next day.

Shockwaves from the earthquake were felt in Las Vegas and downtown Los Angeles as a rolling motion that seemed to last at least a half-minute.

The magnitude 7.1 earthquake hit about 11 miles from Ridgecrest, the town in Kern County which was very close to the epicenter of the magnitude 6.4 quake felt the previous day.

Compared to the first shock, the second was 11 times stronger, five times bigger and lasted longer.

The larger tremor was felt as far north as Sacramento, as far east as Las Vegas and as far south as Mexico.

Firefighters had to battle flames at a mobile home park in Ridgecrest overnight after an electrical fire broke out.

Some 3,000 people in the town were left without power and there were reports of cracked buildings.

In downtown Los Angeles, 150 miles away, offices in skyscrapers rolled and rocked for at least 30 seconds.