No LAWN and order! Thieves steal artificial grass from grandmother’s front garden in the middle of the night

A grandmother has been left feeling for-lawn after the artificial grass from her front garden was stolen in the middle of the night.

Elizabeth Glover, 62, said she was in shock when she woke up on Sunday to discover the patch of green missing from the front garden of her home in St Helens, Merseyside.

The retired IT teacher has speculated that the 10ft by 13ft roll of astroturf, worth £100, could have been stolen for drugs, taken as a drunken prank or even as revenge after she reported a suspicious group of men to police last month.

The grandmother of seven has reported the bizarre theft to the police but is hoping for someone to grass in those responsible or turf up some helpful information.

She said: ‘It looks like someone has come in the middle of the night and stolen the lawn.

‘At first I thought it might have blown away but we didn’t have much wind in the night and we have had gale force winds here before and it never budged in those.

‘We had a slate slab and two heavy plant pots on the grass and they had been dragged from where they were.

‘You never know what goes through people’s minds and of course there are much worse things going on in the world but it’s just mindless and it beggars belief.

‘I’m still in shock thinking about it.’

Elizabeth, who lives with her youngest son, Nathan, had only laid the grass with him in February after it was gifted by her late mother in law.

The shocked mother who sleeps in the bedroom right above the front garden has been left scratching her head as to how it was pulled from beneath her without a sound. 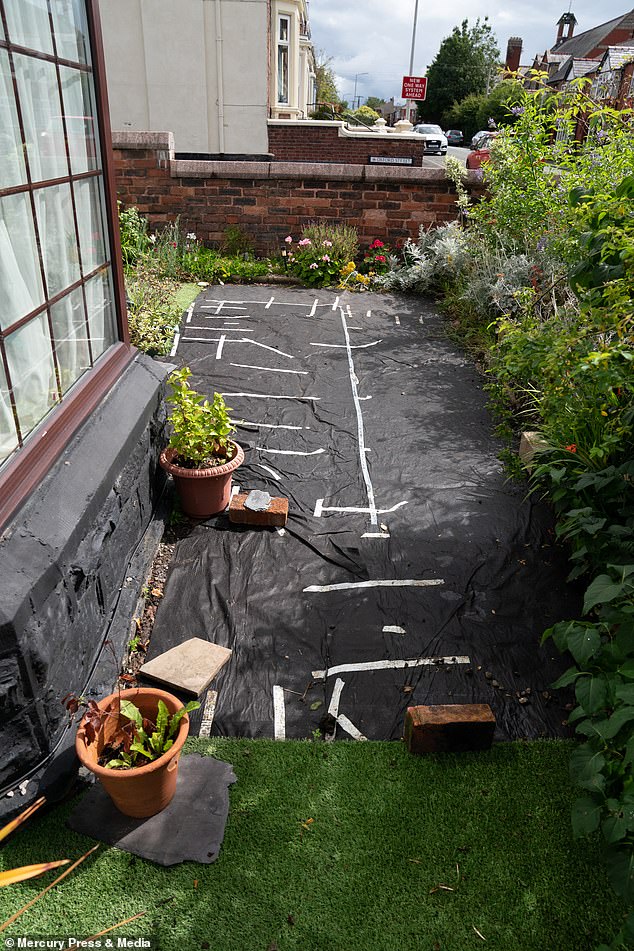 The area of the garden from where the lawn was stolen in St Helens, Merseyside

Speculating over who and why the astroturf might have been nicked, Elizabeth explained that she was caught trying to get a picture of some suspicious looking men who she believed were stealing a bike last month.

But after making an advisory call to the local force, the mother has decided not to file an official report with the police at this stage.

She said: ‘It was my son who noticed it first.

‘He said ‘what’s happened to the grass at the front’ and I said ‘what do you mean’ and he said ‘it’s gone’.

‘It’s a very strange thing to do but it could be for anything, money for drugs, or lads messing around on a night out.

‘I did think that it could be to do with the fact I reported some suspicious activity to the police after these guys caught me trying to take a picture of them with a girls bike, but it could just be a coincidence.

‘I’ve called the police again to let them know but I don’t think there’s much they are going to be able to do so I decided not to log it as an official report.

‘They’ve got to catch people red-handed these days.’