A three-year-old girl had her birthday dreams come true when her mom planned her a ‘Target’-themed party in honor of her love for the retailer.

When Emily Kern, 30, from East Norriton, Pennsylvania, asked her daughter Charlie what kind of party she wanted for her third birthday, the mom was surprised to hear her name her favorite store.

The little girl loves shopping at the retailer, and while her mom asked her repeatedly if that is what she wanted for her birthday party, Charlie never wavered.

Bullseye!  Emily Kern, 30, from East Norriton, Pennsylvania, threw her daughter Charlie a ‘Target’-themed party for her third birthday after her daughter requested the unique fete

Emily took to Facebook a few weeks ago to share some photos from the unique fete, while explaining it was all her daughter’s idea.

The mom decorated the front of the house with silver letter balloons that spelled out Target, and she hung cutouts of the store’s bullseye logo on the door and next to the sign. 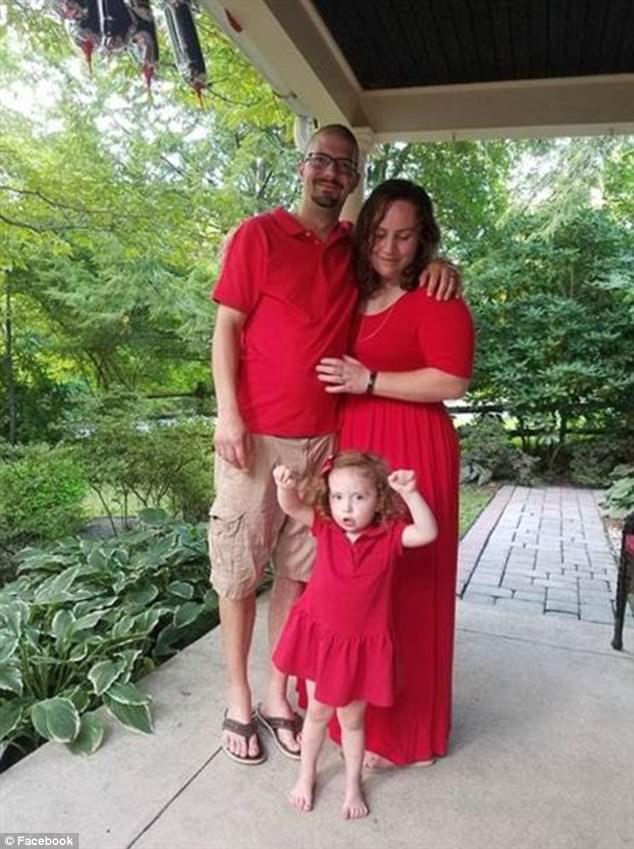 Keeping with the them: Emily, her husband Jonathan, and their daughter Charlie all wore red to match the red polo shirts worn by Target employees

One photo sees her in her red dress, posed in front of her decorated home with her arms in the air to show her excitement.

Her mom Emily and her father Jonathan also wore Target red for the occasion, and they happy posed on their front porch together for a family picture.

Inside their home, Emily set up a Target cafe complete with pizza and hot dogs — the exact foods that are available at the store.

Charlie’s birthday cake was covered in vanilla icing and decorated with the red Target bullseye. There were also red and white cupcakes, chocolate-covered pretzels, and bags of popcorn.

Emily told Today that she tried to give her daughter other party options at first, but she eventually came around to her daughter’s unique idea. 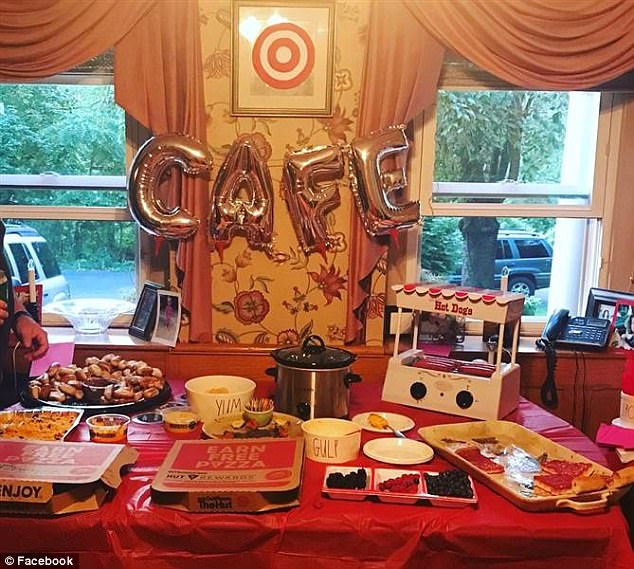 Going above and beyond: Charlie’s mom created a Target cafe complete with pizza and hot dogs — the same foods that are available at the store

Dessert station: Charlie’s birthday cake was covered in vanilla icing and decorated with the red Target bullseye. There were also cupcakes, chocolate-covered pretzels, and bags of popcorn

‘I honestly don’t know a specific time that she began to really love Target, but I think our many trips when she was a baby were to blame,’ she said.

Emily explained that her little girl was born prematurely in August 2014 when she was only seven months pregnant.

When she was finally able to take her daughter home from the hospital that November, it was too cold to take her outside for long.

The mom said whenever she was feeling a ‘little stir crazy’ in the house, she would pack up Charlie and go to their local Target.

Three years later, they are still running to the store whenever they need something around the house.

Unsurprisingly, Emily said the party turned out ‘great,’ and her little girl had a wonderful time.